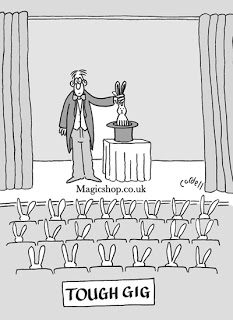 Are there really just two kinds of magic tricks that magic shops sell, magic tricks for magicians, and magic for everyone else?

If you perform magic tricks for your family and friends or other magicians, the type of tricks you choose can be quite different from those you should select to perform to the public. When you are choosing a new magic trick to work on, how do you know which type of trick it is?

Who is your real audience?

When you browse though a magic shop and read the descriptions, notice how easy it is to understand very quickly, exactly what happens in the trick. The trick should be able to be described in just one or two sentences:

If the plot of a particular trick cannot be described simply, it’s probably more suited to be performed for other magicians. The public wants direct quick ploys, especially for close-up magic conditions. The magic needs to be instantly understandable.

Don’t think about ‘how’

When choosing a magic trick, try not to think about the method of the trick initially. First think about what the ‘story’ of the trick is for the spectators. Ask yourself if this ‘story’ or as it’s often called in the magic community, it’s ‘effect’ would fit with your style, be amazing, and more importantly be entertaining.  A magic trick can have an incredibly clever method. One that other magicians will be really impressed to see. The ‘method’ is stunning, but the ‘effect’ is dull to laypeople, its plot is not direct and simple. Choose the magic tricks you want to spend your precious practice time on carefully, taking into account who your audience will be.

Avoid these magic tricks for magicians

If you want to make your magic more commercial and entertaining, avoid the following:

Save those types of tricks for your ‘magic friends’. Complicated tricks are not ‘bad’ in and of themselves, but it’s important to choose the right type of trick for the people who will be watching it.

The Merchant of Magic produces free guides, magic ebooks and videos giving advice to improve your magic. Our free newsletters can help you become a better magician and our team can suggest tricks that would suit your performing style and practice goals.