The Merchant of Magic has been granted permission to teach you 5 free magic tricks from Jay Sankey, taken from a collection of Jay Sankeys back catalogue, plus a sixth trick that remains unpublished.

The magic tricks you will be taught in the ebook range in skill level, so there is something for people new to magic right through to advanced card workers. The tricks use Bicycle Playing Cards, coins, bank notes and everyday objects. Some require a little set up before they are performed, others are impromptu and can be done anytime and anywhere.

Four years ago Joshua Jay and Andi Gladwin started a project to help Jay Sankey clear out his huge back catalogue of magic tricks. That’s no small task, Jay Sankey has been creating new magic tricks and lecturing on magic around the world for many many years. It’s a huge body of work.

The goal of the project was to strip out any average tricks and bring all the most popular creations under one roof.  They didn’t expect the project to take four years to complete, but Jay’s creative output is unmatched in the world of magic, with new releases coming out at an impossible rate. In order to pick the best magic tricks to include, Andi asked ten highly respected magicians including Richard Sanders, David Regal and Rune Klan to pick their ten best Sankey tricks. They featured this in the collection too, so readers can see just how important Sankey’s work is to some of the most creative magicians in the world.

“This project is the largest, most comprehensive collection of one person’s magic ever released at one time. And the material is so, so, so good” – Joshua Jay

The collection has now been completed in three massive tomes. Each book is hardbound, fully-indexed, and printed on treated paper in fantastic two-color rendering. Thousands of crisp photographs were also added. The free ebook contains five free magic tricks from Jay Sankey, contained within the collection and also gives you the content list for each book in the collection. 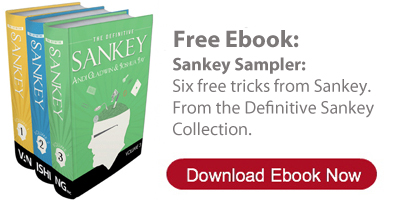