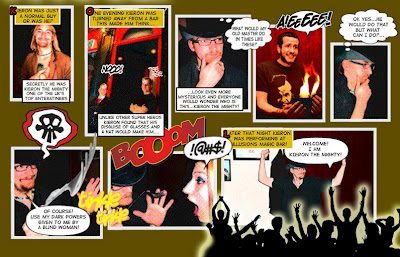 Right now, pretty much every good magic shop is busy telling its customers about the new magic trick from Kieron Johnson: To The Max. The trick has solved a problem that has confounded magicians for many years. How to make cubes of ice appear on your spectator’s hands, in a way that works to walk-around close up magic conditions. The trick has caused quite a buzz, so we thought we should take a closer look at its inventor: Kieron Johnson.

Dominic Reyes caught up with him for an interview:

How did you get into magic?
My friend took me to a magic shop in Southport called Magic 4. I was 21 years old, unfortunately it’s no longer open.

So you didn’t do magic as a kid?
No. To be honest, when my friend told me about the shop, I didn’t want to go. I thought magic was cheesy, but my friend begged me to go with him. I’m so glad I did. That was the best decision I ever made.

What was your childhood like?
For me childhood was quite tough. I was held back a year at primary school and at high school, I was sent to a special school for kids with severe learning difficulties, in a different county. It made making friends quite hard. I spent most my time inventing stuff from old junk, but the funny thing is, what made me an outcast when I was younger, is now the thing people love when I perform. I’m happy my life has turned out this way.

I think younger magicians have it easier, as magic is much more available online. I think it’s possible to be good technically, within a year. As for being a performer it takes much longer. I do think learning with DVD’s makes it a lot easier though.

So, do you think performing skills are more important? What’s your view on self working tricks Vs Sleight of hand?
I’m not a big fan of putting labels on magic, for me all magic should be treated in the same way. In my experience, if you want to fool a magician, do a self-working card trick, I do a mix of both. Take for example, the Invisible Deck, self-working, but there’s a reason Dynamo Magician Impossible does this too.  It’s a powerful trick, and an instant reset. It is the same reason why I perform Cardtoon, It is easy to do, works for all ages, resets fast, and never fails to make your audience smile. I do like flourishing as well, I think a good balance and an open mind is what it take to be a good magician.

What was it about that experience that changed your mind?
Well, the shop was amazing, I think they could tell I was a beginner, because the shop owner Rob Graham absolutely bamboozled me. The one magic trick that really impressed me was Cardtoon 2 by Dan Harlan. I still carry that with me today. I was very lucky, he taught me how to do it in the shop and didn’t let us go until I could perform it, we were there all day. That really taught me about the importance of practice. 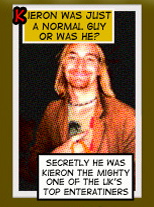 What was your first performance like?
Well, funny enough, it was the same day that I visited the magic shop. We had to get a local train back home. We were chatting excitedly about magic shops and playing with our new tricks, when a bunch of lads asked us to do a trick for them. I performed Cardtoon and they went mental! I got asked for my phone number and ended up getting a gig. Those two experiences made me fall in love with magic.

Wow, you discovered a magic shop, were recommended a trick, got taught by the shop, and got a booking at the end of that day. That’s one of the fastest jumps into professional performing I’ve every heard.
Ha-ha, Well, actually I was a hobbyist for three years before I turned pro. I was lucky enough to work at illusions magic bar for two years which I highly recommend. While I was working there, it forced me to think outside the box, and to invent my own magic tricks. Best of all, it taught me how to handle hecklers I highly recommend getting a residency in a bar or restaurant. That helped me get a grip on what works and what doesn’t. The added bonus, is that you will get more work once people start to hear about you.

How about your first paid gig?
For me, that’s a hard one. Because I really count my first ever gig as performing in the Illusions magic bar in Bristol. Even though I had done gigs before, I always think of that day as my first time. It’s amazing to think that three years of performing magic parties, and weddings couldn’t of prepared me for that day, it was a bit of a shock to the system. The music was loud, and the people were there to see good magic. Most of my material didn’t play to the crowd. It was like being a decent swimmer, then all of a sudden, someone had erased my memory of how to do it, so for me, this will always be my first gig, and the place I became a magician.

Who are your influences in magic?
My two heroes of magic are Richard Sanders and Max Malini. Richard was the first magician I saw  do a lecture. He was engaging and his magic was so strong. On top of that, he’s a really nice guy and the Richard Sander Show series are the best three DVDs I own. I have watched them a lot. 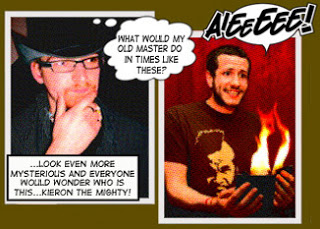 For me Max was awe inspiring to hear about. He was one of the original close up magicians, and fooled some of the greatest magicians in the world. Houdini, Dai Vernon, Charlie Miller, and if you look out, his name is often mentioned in magic films and TV shows. As far as I can tell, he was the first to produce ice, in a world were refrigerators in the home didn’t exist, amazing! I would have loved to be able to see Vernon’s face, when he produced that ice. Check out the Magic of Malini

Where do you get your ideas?
That’s a hard one. Sometimes they come in my dreams. I keep a pen and paper nearby just in case, but mostly I start working on one idea, and develop it by working it in my act. I do this to see how it turns out. Some of the time I end up with something totally different, but that’s the fun of being creative.

What are your favourite tricks to perform?
I am big fan of metal bending. I love Liquid Metal by Morgan Strebler and Metal by Dee Christopher. I also love magic with thread. Tarantula is great!

Magic Books or Magic DVD’s?
Both! I love watching a good magic DVD, you get to see how it plays in the real world, and it’s always nice to see what you are learning.

Books are wonderful too, I love Tarbell and the Apocalypse series. These are all things you don’t get on DVD. You can find some card tricks that are hidden gems, in these books. As a magician, I think that The Royal Road to Card Magic should be banned. I hate it when someone new asks for advice, and they say Royal Road. It has some great material in it, but the English language has changed a bit since then. Why doesn’t anyone ever recommend Mark Wilson’s Complete Course in Magic book? It’s a lot easier, and is full of great ideas for a beginner.

What advice would you give to fellow magicians?
Practice your craft, and have fun. If doesn’t go well the first time, try again because every great magician you see has had to fail to succeed. Another important thing, I would say, is to get some business cards and make sure when you are at a gig you dress smart. It took me four years to learn that, but believe me, it makes a big difference!

The Merchant of Magic would like to thank Kieron Johnson for taking the time to talk with us. if you have not already done so, check out his new release To The Max

SOMETHING TO THINK ABOUT:
Kieron made some very good points in this interview. He used the character that he developed through his experiences as a child to create a performing persona. When you watch the demo trailer of To the Max, you can see the pacing and presentation are very much his own. He hasn’t tried to clone himself into someone else and that authenticity in his performance shines through.

Kieron, doesn’t seem hung up on the issue of sleight of hand. For him the effect is his central concern. He seeks out magic tricks that get stronger reactions, rather than being loyal to the methods alone.

Most valuable from this interview, is his view that his early performances to friends and family, didn’t count in his training. He regards his real schooling to be his work with the public.