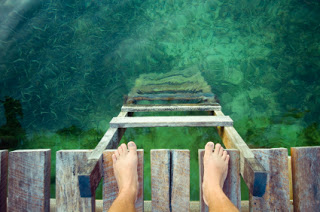 We love practicing new magic tricks. In fact, we bet if you could eat practice, it would taste scrummy! But magic isn’t just about practicing, then moving on to the next magic trick. It’s about getting out and performing. A lot of people that learn how to do magic tricks wonder when they will know they are ready to go out and perform. Let’s look at how to spot when you are ready.

The truth is, you may never feel ready for your first gig.

It isn’t just magicians, anyone who creates something has the same feeling. The musician practicing a new piece, an author working on the drafts of his next novel, the painter reaching the end of his latest work of art. Knowing when to stop is an age old problem faced by creative types, probably since the first cave man started to dab paint on his cave wall. You will probably never get to a point when you feel a routine is perfect. That’s just a fact of life. The secret is to know when it’s good enough for the next stage of learning to start. The end of private practice and time to move on to perform it for the public, and continue to develop though each performance.

One way to overcome the feeling that you will never be ready, it to look at the magic tricks you plan to perform and pick only the easiest, and most self working ones you know.  Bear in mind that your spectators are not magicians. They will be impressed by tricks that you probably think are pretty basic. An invisible deck, a silk vanish and a basic sponge ball routine may not excite your fellow magicians, but those guys aren’t your market. To a non magician, this stuff is cutting edge and very entertaining! Your first few gigs are going to be about building your confidence and discovering how a gig is structured. Keep the tricks simple, so you don’t have to worry about them. You can add more advanced material later on.

Don’t take every trick you own to the gig.

You don’t need many tricks. Five or six tricks are fine for walk-around magic. You will be repeating the tricks for each small group or table you visit. If you load up your pockets with magic tricks, it will just lead to pocket management problems and confusion as to which trick to do next. We get a LOT phone calls from magicians in a panic because they have agreed to do their first public gig, and want to buy a whole range of new magic tricks to perform. We always warn them not to do this. We suggest that they stick with what they already perform and limit their tricks to just those few. A few days later, we usually get a call from them, telling us how good that advice was.

Agree to something a long time ahead.

If I called you today and said that I need your help, as one of my team of magicians can’t do a gig tomorrow, would you jump at the chance? Maybe you might panic and decline with an excuse. That would be a real shame, but it’s completely understandable and does happen. Suddenly, a big, scary event, that you have been working towards as a hobby, pops up, and it all becomes too serious and real.  That’s a big problem, as your first gig will one day pop up like this and you need to be ready for it. A better way to make the big day less scary is by setting it a long time in the future. It’s much easier to agree to do a show or perhaps some magic at a friends party or wedding, when it’s a long way off. As the date gets closer, it’s much harder to back out, and you will be more likely to follow through and do the gig.

Play the role of a magician.

How often do you examine the waiter when he visits your table, and wonder if he REALLY is a waiter? I bet you never have. When you visit a group of spectators, you are playing the role of a magician, and in their eyes, that’s what you are.  You will be treated as an expert, even if you are totally new, because the audience has no idea that this is your first gig. Resist the feeling, that at any moment, you are going to be found out’ and everyone will point at you and say, hang on, he’s not really a magician!’ It won’t happen. There really is no need for this nervousness.  When you perform professionally (In contrast to when you perform for family and friends), you ARE what you are doing: A professional magician. The spectators are not magicians. They don’t care at all about the quality of your controls or palms. They want to be entertained and will assume you are a seasoned professional.

I’m going to let you into a little secret. The team at The Merchant of Magic talk to a LOT of magic beginners who call us in a panic about their first show. Pretty much every time, when they follow the advice above, they come back and  tell us how they wished they had done it sooner. When you are leaving the magic gig, you will wonder what all the worry was about, and be looking forward to doing it all again.

A magic shop can teach you the tricks and give you advice, but it can’t make you do your first gig. Only you can do that. If you have been feeling that you want to perform for a while, now is the time to make a commitment in the future to perform. Agree to perform at a future event, and follow it through. You will be so glad you did.