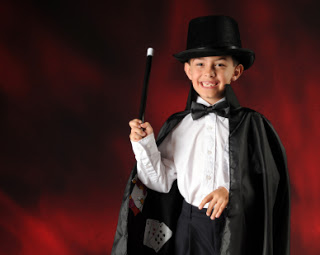 Choosing the best magic tricks for kids should be simple. You visit a local toy shop, choose a set and the job is done. Unfortunately, it’s not that easy.  Most magic sets sold in toy shops are all manufacturer by the same factory. They contain the same little plastic magic tricks that have been going around for many many years. These magic sets are fun and make good stocking fillers. However, If you are a parent who is serious about introducing their kids to the love of magic and performing, you need to find a magic set that does more than this. You need to make sure you pick a magic set that has the best magic tricks possible and really does teach your children the basic principles of magic.

The Merchant of Magic conducted a survey in which they asked several thousand magicians worldwide to vote for the most recommended magic sets for kids. The question of most interest here is:

Which magic set would you personally choose for your own child to introduce them into learning magic?

Over 2000 magicians responded to this question and picked these three magic sets as the best for kids.

The results suggested that magicians wanted more from a magic set than an instant burst of excitement, followed by the gradual spread of the plastic parts around their living room carpet. The sets they chose were not those found in regular high street shops.

The top three recommended magic sets for kids, mainly contained classic tricks that the professional magicians often reported performing themselves. These also seem to have a focus on building up the core skills of magic through practice of the tricks. Instructions on misdirection and sleight of hand are included and the tricks fit well together, allowing the child to build up a consistent and flowing magic act, as they learn each new trick.