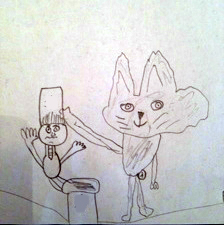 My 7 year old son has decided to learn to draw. A few of his friends, can create amazing sketches, and Felix is no longer content drawing stickmen. He’s not one of those kids that instinctively knows how to draw, so it’s going to take hard work and practice. However, when Felix puts his mind to something he REALLY commits with a passion! He spent all his pocket money on just the right kind of pencils and books teaching him how to draw. He wakes up an hour before everyone else, has breakfast and gets ready for school just so he can put in an extra hour of drawing practice each day. This has been going on for a week or so, and he’s totally determined to master it!

I’m fully aware that I’m being a proud Daddy here, but there is something more going on. Felix doesn’t care that he is just a beginner, in fact, he is very happy that he is. He is delighted with the slow, steady progress he is making. Slowly learning to build a picture’s outline with circles, and then building in more details. He tells me that he’s in no rush and that over time, he will ‘crack it’. He doesn’t seem phased at all by anyone who can draw better than himself and understands that it’s a process of improvement over time.

This is exactly the attitude that you want to nurture with your magic practice. When you first start out learning sleight of hand, it’s very easy to look at other magicians, who are more experienced than you, and try to learn from them. However, it’s important to give yourself permission to not be as good as them. It’s totally fine to be a beginner for as long as you want or need to be.

It’s natural to want to get good at something as quickly as possible. But comparing yourself to people that have been practicing for much longer than you can be a real motivation killer. It’s easy just to get disheartened and decide that you simply are no good at magic.

REMEMBER: You could be seeing a magician’s life’s work in 90 minutes.

There are thousands of magic DVD’s available today, taught by hundreds of magicians from around the world. The more you watch the experts the easier it can be to feel insecure about your own abilities. After all, these magicians seem to be performing tonnes of awesome moves and magic tricks. Remember that you are seeing a condensed selection of their creativity and practice that may have taken many years to develop. Some DVD’s feature a magician’s life’s work in just 6 or 7 tricks they have created and mastered. These DVD’s don’t show you any of the techniques that they are terrible at, the takes on video where it didn’t go so well, or the tricks they have half invented and then ended up giving up on. There are no sections on these DVD’s that show their performance after only a weeks worth of magic practice. You only see their best material, that they perform often and have fully mastered.

Although you are developing your magic talent, you are going to be ahead of some people and behind others. It’s totally fine to suck at a magic technique when you are a beginner.

It’s not a competition or a race.

The important thing is not to compare your beginning to someone’s end.  That’s a luxury that, as a beginner, you can enjoy and embrace as you move forward.