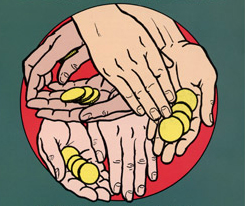 ‘I love card magic and most of the tricks I do are card tricks. Actually, all my tricks are card tricks.  I would like to learn some coin magic as its so impromptu, and not many people carry a deck of playing cards around with them. Nearly everyone will have some change on them. I have tried to learn, but I never give it enough time and would rather learn a card trick. Can you suggest where to start and what to learn please.’?

That’s a great question David and it shows you are really thinking about your magic as a whole, rather than just a bunch of random tricks.

It was a problem that I faced many years ago when I was building my act. The only difference is that my problem was in reverse. I started out with a single book – Bobo’s Modern Coin Magic which I discovered in a local book shop. I spend the next 2 years focused solely on learning coin magic. After that, I had a great range of tricks I could do, but no balance to my act. I needed to introduce other forms of magic, but the prospect of starting at step one again, just left me cold. Because of this, I delved deeper and deeper into coin magic, branching out to include coin box work, shells and flipper coins. The process took me from the core sleights to more extreme coin magic from coin guys like Curtis Kam. Great fun, BUT  it really hit home for me when I would meet with other magicians and session with them. I’d perform my best coin magic, but then sit quietly, feeding very inadequate as they showed off their latest colour change or flourish.

The embarrassing situation had to be put right, so I made a commitment to start right at the beginning and learn the fundamentals of card magic. It was slow going, and SO tempting to forget about the cards for a while and pick up my coins for some practice, but I knew that would not help me in the long run. To this day, I’m better at coin work that cards technically, but I now have a balanced skill base to work from.

Content over Style.
I’m a coin guy, your a card worker etc. No, no, no, we are both magicians. The tools of the trade don’t define the tradesman when it comes to magic. Never forget that the whole purpose of being a magician is to perform magical feats and entertain people with them. It’s the content of the trick, not it’s props that are important.

Choose the magic tricks you learn because they fooled you really well and because you found them  entertaining, and think you could make them even more so. Don’t choose them, just because they use a particular prop you use for your other tricks.

Your study should be like a funnel.
The Merchant of Magic training courses teach that your magic practice should be a funnel. Beginners need to be exposed to wide a range of new areas of magic. New tricks to master, are added one at a time, based on the style of magic the act needs to follow.  Specialisation is something to think about adding later on, once you have developed as a performer and have created and mastered balanced close-up magic sets and acts to use.

When you start to learn hot to do magic, keep your options and mind as open as possible. There is no need to close doors in your practice. Play with card magic, have fun with rope tricks, master the cups and balls and add in some coin work. As you do this, specific tricks will jump out at you, to work on and make part of your ‘working sets’.

Moving backwards to go forwards.
For David, like myself some years ago, there is a hard decision to be made. He needs to make a commitment to step backwards and become a beginner again. It’s a bit like  running around in a maze. You can run through it at fast at first, following any path you want, but sooner or later, you will need to double back on yourself if you ever hope to find the centre. Starting back at step one, isn’t really going backwards. It’s actually moving yourself forward far more than most people do as you understand the bigger picture of where you want to be in the end.

Coin magic is easier than card magic.
When you started to learn card magic, you are faced with an endless range of sleight of hand to master. It’s quite daunting. But slowly you pick up a move here, a sleight there and build on that knowledge. The great news is that coin magic is much easier. Coin work gives you fewer choices.  Just follow these steps to start you off:

Step 1 Good tuition.
If you learn well with a book, pick up Bobo’s Modern Coin Magic you can find it at most good magic shops and even your public library can order a copy in for you for
free.

If you prefer DVD’s, I would recommend the David Roth series Expert Coin Magic Made Easy.,  It’s a three part DVD or download set that starts at the basics with volume one and moves you slowly to intermediate and then to advanced coin work. A cheaper single disc option is the Michael Ammar Introduction to coin magic DVD. Either of these DVD’s is a perfect first step.

Step 2 Focus on the Core Sleights.
Coin magic has far fewer core sleights and card magic. Phew!! You learn those core moves, and then use them to create your routines. I recommend starting to learn the classic palm right from the start. It takes a while to master, but you can practice it everywhere you go as you just need to be holding a coin. When that is coming on, learn and practice the following:

Step 3 An Endless One Coin Trick.
As you learn these core moves, start playing with creating a coin coin routine, when a coin is placed in your hand, and vanishes is produced from somewhere else only to vanish again and appear in a new location. Create a circular routine you can endlessly run through. Build in as many of the core sleights as possible into the routine, so you practice each one every time you run through the routine.

Step 4 The Drill
Once you have an initial one coin routine, you need to practice it. We recommend running through it 20 times twice a day for 20 days.  After the 20 days change it around and run the drill for another 20 days.

Coins can be with you wherever you go, so you can practice magic right under your friends and families noses and they need never know. When I started out, I worked part time in a showroom, and my desk was right next to the showroom window. That made a perfect close-up mirror and the boss never found out. Find interesting places to practice, but seriously, don’t get yourself fired for practicing.

The calling of the playing cards.
Your playing cards will hate seeing you do this. After all, they have had you all to themselves for a long time. The good news is that there is no reason to switch to coin magic completely. Just run through your coin routine at least once, before you pick up your deck of cards. Consider it a warm up for your fingers.

Very soon, you will fall in love with the progress you are making with your coin work and will start to add in a couple of short coin tricks into your close-up sets. Your coin work will give you some powerful impromptu tricks you can perform, but it will also improve the entertainment value of your card magic as you will have a much more balanced act.

DO THIS: Do you have any advice about adding coin magic to David’s act? Please share your thoughts in the comments section below: