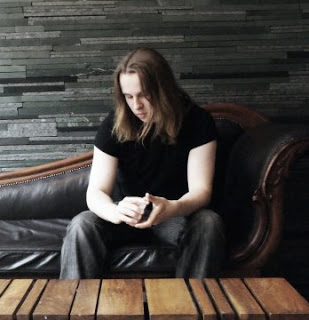 We often get asked for advice on how to improve the script or ‘patter’ that a magician is using to introduce a magic trick they are performing. So many magic tricks are presented with what boils down to a simple description of what is happening and what the spectator should do:

Your presentation of your magic tricks could easily be SO much better than this. I caught up with top alternative mentalist and magician Dee Christopher, who is an expert on the subject, to find out how we can make these introductions better.
Dominic Reyes: One of the questions we get asked often at the Merchant of Magic is how to improve the scripts or patter that magicians use to present their magic tricks. Do you have some advice you can share on this?
Dee Christopher: Garrett Thomas teaches that:
Every movement in a sleight of hand magic trick needs to have a purpose and a reason for it to happen.
But it wouldn’t stop there. The words you use can have just as much power at the sleight of hand you perform. You will improve your magic by making sure that each psychological action you take and every word you say will increase the impact of a magic trick on your audiences.
Dominic: So with that, you mean that even statements within your ‘patter’ that don’t relate directly to the instructions you need to give the spectator, could be constructed to improve a trick?
Dee: Yes, but it’s important that you first ensure that you have a proper understanding of your character and the abilities you claim to have. This is important so you can create justifications to support those abilities in the mind of the spectator. Once you understand who you are and how you are usually perceived, this is a great way to instill belief in your spectators.
Dominic: Can you give us an example?
Dee: Sure, we can use ‘power statements’ to assume implied belief in the magic we are presenting. It’s creating belief through the acceptance of belief. This technique can easily be added to the start of any magic trick or metalism routine. Let’s look at adding a question in your introduction of a Mentalism effect:

It was Kenton Knepper’s work that introduced me to Definition = Creation, the concept is that by defining something, you’re giving it weight to be accepted as reality in the spectator’s minds.

The Sheep concept is what I’ve called the strange fact that people generally act like sheep. Not in the literal sense, but on a whole, people let the majority’s thoughts influence their thoughts. Social convention, norms, etc. If everyone else thinks and acts in a certain way, I should too.

The basic idea of creating belief through accepting belief (CBTAB) is that you will subtly introduce your spectator to a belief that most other spectators have about you or your work.

This is done in an offbeat way, so you don’t draw much attention to it.

Here’s an example, so you can see the concept in action:

“People often ask me after I do this, if I have to make contact with the participant to read their thoughts. It’s not essential, but sometimes it does make things a little easier.”

A simple little statement, that’s delivered almost like a question and an answer.

You’ll notice that I start with:

This suggests that the question is asked often. It implies that other people assume what I’m claiming to be true and ask a further question about it. Another way to create a similar effect is to say: “Most people ask.”
Why it works: Using this kind of sentence can be very powerful for two main reasons; firstly, we can only answer questions when we have the answer. Secondly, the answer isn’t just spoken, someone has to ask the question, for it to be relevant.

After this little contextual ‘power statement,’ I move on and say this popular question in simple, direct terms:

“… After I do this If I have to make contact with the participant to read their thoughts.”

This part of the statement is extremely powerful for a number of reasons:

“It’s not essential, but sometimes it does make things a little easier.” The final part of this sentence gives an answer to the question, which shows your authority on the subject. By saying that it’s not essential for you to make contact doesn’t necessarily contradict the witch doctor point, but can potentially strengthen it, there will still be a point in the trick in which you will receive the thought, but this now allows you to turn this action from having to be a touch, to being able to be whatever you like, perhaps a strong stare directly through the eyes or something even more theatrical.Saying that “…it does make things a little easier,” implies that it’s not an easy task to do this, if it was easy to do, you wouldn’t even mention this action that could make it less difficult to perform.

Dominic: Thanks Dee, That’s a really useful technique. Where can readers find out more about techniques like this, if they feel that they would like to develop their ‘patter’ to have more of an influence on the magic they present?

Dee: It’s worth checking out Kenton Kneppers work, also if they are interested in further developing their characters, I would suggest reading How to get away with murder. It has a lot of advice on creating justifications and building your persona.

DO THIS: So there you are, a really basic use of the CBTAB principle. Dee shows us that every word we say really can be made to have impact and can help create a fantastic tool to enforce belief and strength in our claims and abilities as performers.

Look back on the magic tricks that you already perform and see if there is an opportunity to add in an introduction that will add belief through the acceptance of belief. It’s a very small addition to your ‘patter’ but you will be amazed at the reactions that this can have.