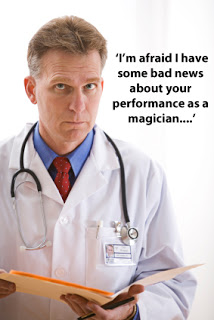 Ah, yes, do come in. Close the door behind you and take a seat.

Now, your test results are back from the lab, and I’m afraid I have some rather bad news for you. I’m sorry to have to be the one to tell you, but the results show you are suffering from Analysis Paralysis…’

Question: Do you have any close up magic tricks you constantly practice, but never show anyone? If you perform regularly, do you take a few tricks to most gigs but never perform them?
Here’s a short fable from Aesop:

The fox and the cat.

One day a cat and a fox were having a conversation. The fox, who was a conceited creature, boasted how clever she was. ‘Why, I know at least a hundred tricks to get away from our mutual enemies, the dogs,’ she said.

‘I know only one trick to get away from dogs,’ said the cat. ‘You should teach me some of yours!’

‘Well, maybe some day, when I have the time, I may teach you a few of the simpler ones,’ replied the fox airily.

Just then they heard the barking of a pack of dogs in the distance. The barking grew louder and louder – the dogs were coming in their direction! At once,  the cat ran to the nearest tree and climbed into its branches, well out of reach of any dog. ‘This is the trick I told you about, the only one I know,’ she called down to the fox. ‘Which of your hundred tricks are you going to use?’

The fox sat silently under the tree, wondering which trick she should use. Before she could make up her mind, the dogs arrived. They fell upon the fox and tore her to pieces.

A single plan that works is better than a hundred doubtful plans. – Source

Just like the fox, many magicians find they have too many choices, and spend too long considering or analysing a routine or their performance before first trying it out. They are victims of a common problem called: Analysis Paralysis.

Analysis paralysis happens when we over-thinking a situation or problem. Spending too much time thinking about a trick, practicing and adjusting the trick or routine so that a decision to perform it is never made. The over thinking, in effect, paralyses the performer.

Because a magic routine can easily become over-complicated, with too many performance options, it’s easier to put it on hold, rather than try it out and change any parts of it, should a problem is found.

As we work to become better magicians, we are always striving for the ideal or “perfect” performance. It’s the fear of making any decision which could lead to a bad performance, when some unknown better solution or technique could be found.

Now, if you have explored more posts on this blog, you may well be thinking: ‘Hang on, many of Dominic’s posts urge me to keep practising and to slow down my learning to improve my sleight of hand. ‘ Yes, that’s true, and I still think most magicians would benefit from not rushing to perform a trick within a few days of receiving it. Analysis Paralysis isn’t about rushing to perform. It’s about finally making a decision that a trick is ready.

Chances are you have a few tricks that are already mastered and ready to go, but you keep working on them, practicing and tweaking the presentation in your practice sessions. In reality, they have been ready for months, but you haven’t ‘drawn a line’ and consciously labeled them as ready to go.

If you do have some tricks that are ‘on hold’ like this, unless you commit to trying them out, they will never be completed.

DO THIS: The next time you perform your magic, give one of these tricks a go. At the end of your normal set is usually the best time to try out a new trick. Once you have shown everyone your main tricks, you can relax and revisit groups of spectators that were particularly receptive to the magic. By this time, you have nothing more to prove. The trick’s presentation won’t be as good as it will be after your 100th performance, but it doesn’t need to be.

You are ‘breaking it in’ with a crowd who are already impressed with you, and on your side.

Every show that passes with that trick still in your close-up bag is an opportunity wasted. You know that you will kick yourself later on, when the trick has made it into your core act that you took so long to try it out.