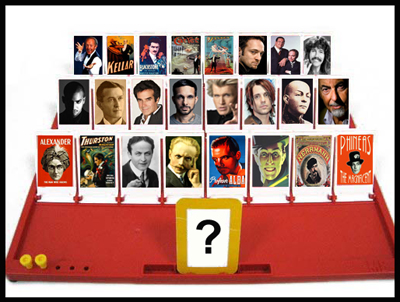 Which famous magicians inspire you? Who pushes you to develop your magic further and reach for that deck of playing cards?

We all have famous magicians as magic heroes. Famous historical magicians and those that are currently being promoted on TV. Getting inspiration and motivation from a range of famous magicians is an essential part of becoming the best magician you can be.

For some, watching famous magicians perform their acts is the gateway to discovering magic and making that first step to learning themselves. For others, it’s a constant source of motivation to practice and develop their own skills. It’s possible to learn so much from other magicians.

We asked a bunch of magicians to tell us who inspires them. We wanted to know which famous magicians they respect in magic and regard as their current favourites. The most popular choices tend to be those that have become iconic figures in magic over the years, through TV appearances, but there are someless famous magicians in the list, which we also recommend you seek out and learn from.

The individual answers aren’t really that important. It’s that they DO have famous magicians that they love to watch and who keep magic alive and fresh for them. As we learn more and more magic secrets, it’s very easy to become disengaged with the real meaning of magic, that made us fall in love with it. Watching famous magicians helps give us that feeling of amazement back, that’s so easy to lose sight of, once we have stepped behind the curtain of magics secrets.

Here are some of the best responses. For those of usinterested in this as a popularity contest (which isn’t the point) the most popular famous magicians were Dynamo – Magician Impossible and Paul Daniels.

The real purpose of this question, is to show that everyone needs to be inspired.

Were all your favourite famous magicians mentioned? Tell us who it is, and why, in the comments section at the end of this post.

Derek Degs Gibbin Ooo tough call. I would have to say internationally Jeff McBride, simply because his hand manipulations are insane. My favourite performances from Jeff would have to be “Masks” and “Miser’s Dream”. As far as UK famous magicians go I would have to say Wayne Dobson, he had me fascinated and crying with laughter as a youngster. More recently, I am quite enjoying Dynamo – oddly not necessarily for his magic (which is without question great), but more for the inspirational backstory.
Martin Rechkemmer Paul Daniels : When I was 8 I saw him perform the French drop in a coin routine, so I practiced for months, till it hit me how he did it…
So I started perfecting it.. And that’s how I stated in magic, right up to becoming a professional magician/mentalist/hypnotist, with my own business. So thank you Paul for inspiring me to live my dream to perform and entertain people, n change people’s lives n inspire a new generation.
Luke Cunningham Jay Sankey, great performer and innovator in lots of areas in magic!
Joseph Reynolds Gregory Wilson, just so many reasons.
Sheila Linnell Jeff McBride.
Rastafari Melchizedek Shabazz The Professor Dai Vernon.
Luke Baker Daniel Garcia because he is creative and has a humorous style.
Cliff Morton Tommy Cooper.. You have to be that good…. to mess it up that well.
Peter Nevar-Jones Doug Henning… Awesome…
Daniel Slogan Oliver Being a fan of magic AND comedy, my favorites are anyone that can combine the two. It takes a great deal of skill to perform them BOTH on their own let alone at the same time but if you think about it, comedy is a very likable trait to have as well as a VERY good form misdirection.
Sy Williams David Stone : Slick and polished and Very entertaining. Produces great books!
Jack James James Brown, he’s brilliant.
Simon Caine John Bannon. The thoughts that goes into his routines is exemplary, so many subtleties!
Connor Gardner Alan Rorrison absolutely amazing at magic.
Jack Cooper Lennart Green.
Marcus Morgan Woody Aragon, because he’s funny with it!
James Steer Eric Jones
David Watson Jerry Sadowitz.
David Crimefighter Williams I’m still a big Penn and Teller fan. Plus he named his daughter Moxie Crimefighter Gillette.
Jerico Guzman Paul Harris, I think his work speak for himself, he is just the master!!!
Daniel Godwin Paul Harris for his direct and hard hitting magic. The guy is a creative genius.
Ricardo Waitforit Thomaso Derren Brown and Jay Sankey. Derren because he’s actually an incredible card magician, he just doesn’t get paid to show it off on TV (not to mention the ridiculous stunts he pulls off with mentalism). and Jay because he’s nuts and got a trick using anything.
Danny Williams Dynamo he is more modern.
Marcus Morgan David Ginn is great fun, especially as he has so much stuff on YouTube.
Jay Pimentel Daniel Madison! Hands down…
Milk Dud Justin Miller his creativity and psychology behind all the effects he does is truly remarkable and the things he comes up with are very practical and modern definitely one of the greats.
Jared Larson Dan Sperry creepy and awesome or Paul Harris because he’s amazing.
Paul Mateer Paul Daniels and Jeff McBride…..
Chase Gosch Lance Burton, Dai Vernon, and The Amazing Jonathan.
Cris Cobra Criss Angel, because he taught me to believe and not to be afraid of reality.
Michael Weber Tommy Cooper. Jus` like that!
Lou Bowser II Dan Sperry because he’s a very talented stage illusionist and Jay Sankey -awesome magician and I love his humor.
Lewis Matthew Leach Dynamo magician impossible because he can do literally anything!
Matt Thefishbrainking Tavanah   Channing Pollock, OK he’s dead, but he still rocks.
Gary Sumpter Daniel Garcia and Jeff McBride. Why? Because these guys don’t rely on tricks or budgets to do what they do, they both have fantastic personalities that shine WAY above the tricks themselves. These guys are an inspiration to me. Its not what you do or how you do it, its how you ARE.
Giuseppe Canuzzi Michael Vincent because it’s elegant and he transmits something more than astonishment,he transmits to me deep emotions..
Łukasz Lucas Lisztwan Penn and Teller and DYNAMO!
Daniel Kirkwood Michael Vincent because his classic magic style and amazing work makes him a great magician.
Glyn Morgan Tommy Cooper sheer comedy genius but an accomplished magician too.
Jørund Werner I have more than one favourite. Difficult to choose. I love Paul Daniels, he is a great entertainer, and a complete magician. I like him because of the way presents his magic, involving storytelling, jokes and theatre. Magic is more than knowing how to do magic tricks, you have to make it into great entertainment, and that is what Daniels does with his magic.
Andrew Wookey for me, it has to be Wayne Dobson, incredible comedy!!
Magic’Al – Close Up Magician Damien O’Brien or Barry and Stuart. Damien O’Brien is a better version of dynamo before he became TV and Barry and Stuart are hilarious, wacky story lines and are really well choreographe
Jayden Darling David Copperfield, because he does the impossible like walking through the great wall of china or by making the statue of liberty disappear than reappear and all in front of a live crowd.
Andrew Harding Derren Brown, because he is awesome and you are left questioning and trying to work out how he did the trick or illusion.
Edward Mann Jay Sankey because he is one of the most creative magicians EVER and he really cares about the art that he has given so much to.
Joe Tupling Slydini cos he is epic.
Charles Secombe Dan and Dave, because they inspired a whole generation and built up a new art form – cardistry.
Danny Edwards Penn and Teller because of the impossible magic they achieve like shooting guns at each other and catching the bullets in their mouthes!

Enjoyed this post about famous magicians? You can throw us a ‘scooby snack’ by sharing it: