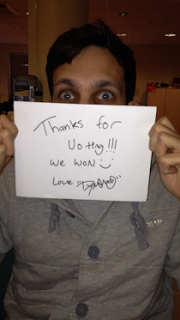 The Dynamo Magician Impossible TV show was voted by viewers to win the TV Show of the Year at the 2013 Virgin Media Awards.  Beating iconic TV Shows like ‘Sherlock’ and ‘Doctor Who‘ to the top place. The other two TV series only getting a quarter of the votes between them.

WE WON!!!! Thanks to everyone who voted 🙂 @VirginMediaTV #MagicianImpossible Show of the year Virgin Media Awards! http://virg.in/AwardsWinners

This is great news both for magicians and magic in general. He is introducing a whole new generation to the world of magic tricks.

The third series of Dynamo: Magician Impossible is due to air on TV shortly. Magicians in the UK are enjoying a booming market for close up magic as a result of the current popularity of magic on TV.

If you are a close up magician, now is the time to focus some of your marketing efforts on venues and events that perhaps you have not considered in the past. Festivals, PR Events and retail store opening parties can all be a great source of work. You need to take action to contact companies that plan these events.

Dynamo’s magic tricks may be popular at the moment, but nobody is going to come looking for you, unless you let people know what you can do. Even Dynamo spent years doing just this kind of promotion before he was taken under management and his TV career started.

Create a media or press pack about your services as a magician and add a link to it on your website.

Google event planners and PR companies to find events in your area that may be interested in using your magic tricks.

Contact your local radio and ask if they would like you to come on air and so some audio magic.

Get out and start performing your magic tricks at festivals, parks, pubs and local events to gain exposure.

Now is the time to capitalize on the popularity of live magic. It’s never been a better time to show people street magic tricks up close and create your own local reputation.

How Does Dynamo Do His Tricks?
Lessons from Dynamo Magician Impossible

How is the Dynamo Phone in Bottle Trick Culturally Significant?

Liked this post? Let us know by sharing it with your friends here: