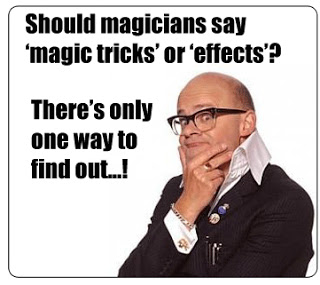 As you study magic, you will quickly come across a term of common industry slang that magicians use, but you most likely won’t hear outside the magic community. Knowing the terminology will help stop you appearing like a magic newbie.

Why do magicians use ‘effects’ rather than ‘magic tricks’?

Is it habit, a social norm, or simply ego? Perhaps there is a good reason behind it? We asked magicians to share their reasons for using the term:

Richard Gibson Dogs do Tricks, magicians perform magic effects. As far as the spectator is concerned I just performed a miracle for them. The word “trick” devalues the effect.

Mark Waddington  It makes them feel smart. The only thing I hate more than this, is when they perform to a lay audience and offer to show them an ‘effect’.

Rob Newson I always say ‘would you like me to entertain you for the next 10 minutes?‘ I don’t like saying tricks or effects.

Ben Cook When you are performing to a spectator, you are affecting that person and hopefully they will remember you.

Andy Russell A great trick can affect whomever your showing.

Col Balddaniels Daper Doesn’t matter to me what their called to be honest, each to there own! Myself, I call them nothing. I ask if they mind me showing them something or a little something.

Paul Cocker The word ‘tricks’ sometimes has bad connotations: tricky, trickster etc, and doesn’t sound as entertaining as an effect. I avoid both and just use the word magic, or more usually just perform an attention grabber, and let them choose which word to use.

Filip Ilinca Negative connotations aside, ‘trick’ implies deception which is usually hidden from the person experiencing it (the spectator), it is the modus operandi of the perceived impossibility created by the performer, as opposed to ‘effect’ that the deception has.

Steven Holt Snobbery I think. I’ve always called them tricks. Effects, sounds too geeky for me.

Cathy Russell Magicians bend reality. Nothing changes, but the way we perceive their art and how they apply it!

Damen William Lewis Nobody likes to be tricked….. It takes away the meaning of the art.

Matt Thefishbrainking Tavanah I don’t say that to spectators, I say ‘amaze’. I call them ‘effects’ to other magicians.

Dan Hollingshurst What matters is the ‘effect’ it has on the audience – and their resulting reaction.

It seems that magicians do prefer using the term effects rather than magic tricks, when talking with each other, but in performance, they don’t tend to use the term. If you do start calling magic tricks: effects, it’s important to stay aware of it. It’s not advisable to use professional slang, in your act:  ‘let me show you this effect with a deck of playing cards’. Equally, when discussing magic with other magicians, the reasoning behind the two terms is already apparent, so is it even necessary?

Let us know your thoughts about this in the comments section below:

NEXT: The danger of a magic trick difficulty level set to ‘easy’