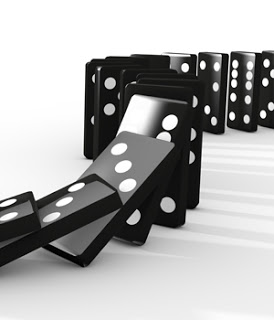 Performing one magic trick, then putting it away and taking out another is like being a comedian that fires off unrelated gags. The comedian tells a range of jokes, knowing that sooner or later, one of them will hit the spot and make the audience laugh. Your magic can be much better than that. You can build in a theme that runs across all your magic tricks and ties them together to create something greater than the sum of it’s parts.

How Your Magic Starts.

Rather than getting out the props for a new magic trick, could the previous trick introduce the props for the next? Could it make an object appear that you then use for your next trick?

Here are 5 quick easy card magic tricks bound by continuity. Notice that they flow together as they tell a larger story about the most amazing playing card the magician has ever seen.

You take a shuffled deck of playing cards and magically find all four aces. You explain that one of the aces has very special properties.

The aces are then used for a mentalism trick, and the spectator is asked to choose one, and it matches a prediction because it is the ‘special card’

Once the prediction has been made, the chosen card vanishes and appears in your wallet

You then destroy it, only for it to  reform, as a torn and restored playing card.

One corner remains unhealed. It vanishes and appears in an impossible location.

How Your Props Vanish.

A previous magic trick, could give an explanation to your spectators, as to why an object vanishes in a magic trick that follows. David Roth uses a Portable Hole, and it’s a great example of this. The idea of a portable hole that makes your props vanish can run through all your magic tricks, appearing to cause trouble for the magician and bring props in and out of play.

Thinking about joining the magic tricks you perform into a set that has continuity and a story line that runs through it, will greatly improve the reactions you get from your magic tricks. It will improve your pocket management, the timing and flow the act and will create an overall ‘message’ that is far more memorable to spectators than a generic magician what performed a series of unrelated magic tricks.