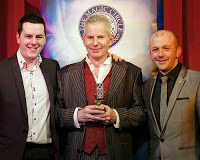 The Magic Circle has announced that Tim Shoesmith is the 2013 Close up Magician of The Year.

Eight magicians took part in the competition, staged at The Magic Circle headquarters in London.

The magicians entertained members of the public whilst being filmed and broadcast to the Magic Circle theater for magicians to evaluated the contestants performance.

Magician Tim Shoesmith was awarded the first prize.  He performed a torn and restored card magic trick, themed on Shakespeare. The presentation described his experience as a child playing the character Puck in  A Midsummer Night’s Dream.

Third place was magician Will Gray. His Goldfish production went down very well. He performed a signed playing card, to a sealed deck magic trick that fooled many of the magicians.

How do you win the Magic Circle Close Up Magician of the Year?

The Magic Circle Close Up Magician of the Year competition isn’t just about the magic tricks the magicians perform. Many of the magic tricks are not original to the performers. There are versions of many of these tricks available through good magic shops. The tricks themselves only take a magician so far in the competition.

The winners need to prove that they can add their own unique spin to the magic tricks they perform to the public. They need to engage the audience, capture their attention and pull them in to the magic, so the spectators CARE about the magic they are being shown,

The magic tricks that work best in The Magic Circle Close Up Magician of The Year competition tell the audience something about the performer. The presentation of the magic tricks create a small story with a beginning, middle and an end, framed in such a way as to stand alone even when performed as part of a set.

The technical skills of the performer will only take them so far in the competition. Charisma, a professional style, and stage craft that has been adapted to table magic conditions is just as important.

What can the Magic Circle Close Up Magician of the Year Competition teach us?

Look at the magic tricks that you currently perform.

How could you create a background to the tricks, so they become a piece of theater?

How can you adapt them towards your own unique direction?

Do they communicate any of your personality, or are they generic and interchangeable?

Have you practiced how you will move around the spectators when you perform?

Are you working on how you engage the spectators, interact with them and how your appearance and behavior communicates to the audience?