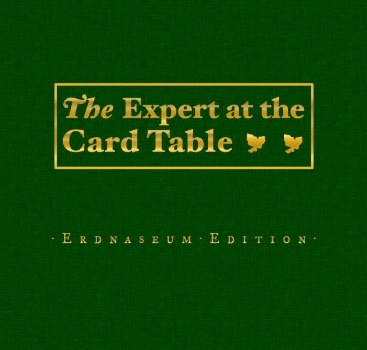 The most famous book on how to do card magic is Expert at the Card Table by S.W. Erdnase.

Is the book still useful for magicians?

Should it be recommended to beginners, or viewed only as an historical text?

Why is Expert at the Card Table so popular?

There’s no denying the importance of the book to magicians. Expert at the Card Table has remained in print since 1902. More than any other book on card magic, Expert at the card Table has played a central role in the training of magicians. It has been reprinted many times. both in its traditional format and as annotated versions, including the new release by Mike Caveney – Annotated Erdnase. The book has been translated into Japanese, German, Spanish, French, and Italian.

Magic DVDs have been released by a several professional magicians, attempting to explain the techniques in Expert at the Card Table in more accessible ways and adding their own suggestions to the methods. Allan Ackerman, Wesley James, R. Paul Wilson and Revelations series of Dai Vernon are the most popular modern adaptations of the book.

“… perhaps no other book in all the list of conjuring books has been so avidly read, so affectionately regarded.” – Jean Hugard

Magician Guy Hollingworth performs an excellent show presenting the story of Expert of the Card Table.

Dai Vernon often quoting from it, including page references, when teaching card magic at the Magic Castle.

Problems with Expert at the Card Table:

There are several problems with Expert at the Card Table from the beginners perspective. It’s outdated and it’s older style of writing can make it a very hard read. Textbooks have moved on considerably over the last century, and modern students are used to information being presented in a much clearer and considerate layout.

The book is know to contain ‘misinformation’, ‘errors’ or ‘traps’ depending on who you ask. Regardless of Erdnase’s intentions, the text does need an interpretation in parts.

The methods taught in the book have become classic techniques for magicians. Many of the best have been perfected and developed further over the years. New methods replace old and it could be argued that the best parts of the book are now available in improved texts that are easier for beginners to learn.

Is Expert at the Card Table suitable for total beginners?
Impressive recommendations, but should The Merchant of Magic recommend it to beginner magicians that ask us which magic books they should read? Our first recommendation to complete beginners has always been Royal Road to Card Magic, but what is the next step?

Adam Symons writes: ‘Worth reading? It depends what the reader is expecting from it – don’t forget its essentially a manuscript on card table sleights with a few tricks bolted on at the end. While some of the techniques have been superseded, the advice of deportment, and attitude etc is still as valid as it was over a hundred years ago (as, IMHO, is the advice on the Shift), and there’s still plenty of useful card work in there. I also think there’s a degree of snobbishness surrounding it.’

‘Personally I think the balance lies somewhere in between – I’ve taken a lot of useful things from it, but I don’t regard it as the ‘be all and end all’ of cards. I’d definitely recommend it to a novice, though not as a first text, if only for the undoubted historical contribution to their art.’

What do you think? Has Expert at the Card Table become nothing more than an icon or badge for card magicians? Is it a case of the ‘Emperors new cloths’?

Has it’s content been refined, improved, or reformatted giving new choices that are easier and more effective magicians training sources?

Should it be essential reading for beginners?
Let us know your thoughts in the comments section below: