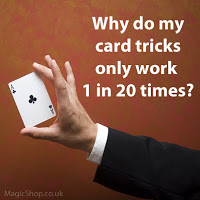 James is having trouble learning a card magic flourish.  He writes:

‘I would like to take this opportunity to thank you for the chance to receive these update emails. I have been doing a card magic trick for 1-2 weeks now and I can do a few basic flourishes and card tricks.

Currently I am focusing on flourishes and I am attempting a trick that is above my skill level but it’s a flourish I really want to learn. I can flip the deck successfully 1 in about every 20 flips. I practice about 1-2 hours a day along with various card tricks in an extra hour totaling about 3 hours a day. Any advice would be really appreciated.‘

Dominic Reyes:
Sounds like you may be practicing too much. I know that sounds crazy, but you’re learning motor skills, so small amounts of practice often, is better than 1-2 hour chunks. Set up a practice drill, so you run through the card magic trick 15 times in the morning and 15 times in the evening, every day for 21 days. Slow it down to the slowest you can do it, yet it still ‘work’.

It’s a good sign that you are getting the card magic trick 1 in 20 right. It means that you have the ability. You just need to build consistency in technique.

The danger is that the 19 failed attempts are reinforcing the wrong actions. That’s why you need to slow down the action, so you can check everything (finger placement, Deck placement, pressure applied, thumb placement etc). Speed can build up later, on it’s own. You just want to focus on how the times that the card magic trick worked are different to the times it didn’t. It’s all really just physics, so the times that work WILL have something different happening from the times that don’t.
Focus on learning just one card magic trick or routine at a time. Splitting your practice time on several magic tricks slows you down. Choose ONE routine or card magic trick to master and make the commitment to work on just that project until you are happy with it. Jumping from trick to trick makes you a ‘jack of all trades, but a master of none’. It’s not a race, so make sure you are not trying to learn magic too fast
Adam Symons:
To learn a completely new sleight, first work out what the slight is trying to accomplish – with fans and flourishes, etc this is self evident, but with things like false deals, shuffles etc, it pays to have a clear idea of what the outcome of the move results in.

Oftentimes, an author has solved a card problem for themselves and the method they put out is one that works for their hand size, so by getting a sense of what the mechanics are trying to achieve you can begin to translate the action into something that works for you. If you’re having trouble mastering something, THINK! Break the move down into it’s component parts… Are you gripping the deck too tightly? Is the deck int the wrong position in your hands? Would you get a better result with your fingers in a different position?

Pay attention to the quality of the deck, newer, more slippery cards behave differently to an older, broken-in deck. Practice with your head as well as your hands – a lot of card manipulation boils down to an exercise in controlling friction (you’ve either got too much, or too little giving you the problem).

For beginners, work on the basics first (Charlier cuts, pressure fans) before going for that hotshot cut, to improve hand strength and co-ordination. And don’t give up! If it was easy, there’d be no value in the skill!

Daniel Chard:
It’s key to remember that all sleights are a means to an end, they are much better in the context of a structured routine as appose to just learning them for sleights sake!

Take sleights and work them backwards, change the grip, handle them differently, change the timing.An interesting philosophy for moves:

If you can’t hide it, exaggerate it!

Exploit the part of move you can’t do, and try to come with a novel way of getting around it!

Learn at your own pace, but once you are ready take it out in the real world to test your effect, move in front of an audience! You will learn more in those few minutes of performance then any magician can teach you. Speak with trusted magic friends, ask for constructive feedback.

I hope that this has proved helpful and good luck with your journey.

Do you have any practice advice that will help James with mastering a ‘knacky’ card magic trick? What was the hardest flourish you mastered, and how did you work on it? Please share your ideas in the comments section below: