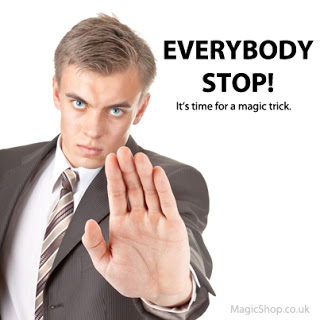 Magicians often ask me about the right way to approach people, interrupt them and begin showing them magic tricks.
It’s an interesting question, especially for a working magician as that’s something we have to do many times every night. If you do something often enough, you tend to get good at it.
After many years performing, I now consider myself very good at interrupting conversations 🙂

The magic secret is that you don’t actually have to interrupt. It’s about your ‘presence’ and being noticed, much more than just barging in and taking over a group.

Let’s look at the two main situations where this comes into play:

As you approach a group of people, they will already be in conversation. If not, something else is capturing their attention, or they just don’t like each other very much. You walk up to the group, finding a space to join the ‘circle of people’. Pause for a moment to see what the conversation is. The people either side of you will do one of four things:

If a conversation is taking place, chances are that someone is in the middle of telling a joke, anecdote or making a point. Allow that to finish, then introduce yourself. Don’t interrupt someone’s joke or story. You wouldn’t want that to happen to you, during a magic trick, so extend the same politeness to them. The moment they finish, and before someone else can begin a turn, you take the moment to introduce yourself.

If the guest has told a joke, make sure you laugh too, and complement them on it. Allow them to have their moment of ‘reaction’ from the group.

It may seem like the person talking is taking a long time to tell their story or joke. Relax! It seems a long time to you because you’re in ‘performing mode’ and waiting for a jumping in point. It will happen soon, and a minute or two is fine to wait. It’s not your turn yet.

Things are different at the tables. The dynamics of a magician approaching a table and interrupting people is different from standing magic. Unless a guest is talking to the whole table, people will be doing their own thing. Waiters approach tables and divert attention often, so an interruption is expected. However, you need to have presence and be noticed quickly.

It’s not a good impression to arrive at a table and stand there being ignored for long, so you should get the tables attention as soon as possible. Asking the whole table a question, focusing on a person on the opposite side of the table, works very well. You need to signal to the WHOLE table that they should stop what they are doing and pay attention to you. If you don’t, you may end up performing to only one side of the table while the other side continue their conversations. Not good..

Here’s a quick video of me doing a simple cup and ball routine at a table. The trick itself is nothing new, but I include it here to show you the approach to get everyone’s attention. It’s just the first few seconds of arriving at the table that are important to note. I want everyone around the table to stop what they are doing and watch, so I ask them to react to a spectator who will help me.

Many magicians worry about how to approach people to show them magic, but it’s much easier than you think. Just remember to ‘join a group, and control a table’. You will find that it only takes a short time for you to relax about doing this, and you will no longer worry about approaching people.

Let me know your thoughts about this in the comments section below: