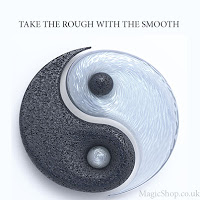 We are going to show you the best method to easily make your own rough and smooth playing cards.

Here’s a free online video teaching you how to escape those problems, with an easy, instant and practical way to create your own rough and smooth playing cards whenever you need them:

The origins of rough and smooth playing cards have been lost in time. They almost certainly started off being used by gamblers and card cheats. The original idea, was to cause the cards to stick together using chemicals. If prepared correctly, the cards could be made to separate when force was applied.

Some magicians attribute the rough and smooth principle to Johann Hofzinser (1806-1875) who is known as the father of modern card magic. However, this is hotly debated. References to his technique suggest he used a chemical called diachylon to fix and stick envelope card, rather than to create a rough and smooth action used in card magic tricks.

A technique to create a rough and smooth action with Bicycle Playing Cards appeared in Ellis Stanyon’s Magic, 1914 No. 73. This was done by mixing Air Cushion and Ivory finish playing cards together.

Karl Fulves writes in ‘The History of the Brainwave principle’ on the subject of rough and smooth playing cards in their modern state. He attributed the concept to Nelson Downs in 1924.

During the early 20th century, the rough and smooth principle remained underground. It wasn’t until the 1930’s when Joe Berg brought it to the mass market with the Ultra Mental deck (later renamed to the Invisible Deck). Dai Vernon’s Brainwave Deck followed, and in the 1940’s the variations we find at the core of so many card magic tricks today became popular.

3 Quick Tips for using a rough and smooth deck of playing cards.

1) Keep the deck in a card clip when not in use. This will keep the cards flat, and in good condition. Bent cards reduce the effectiveness of the rough and smooth action.

2) Take time to practice spreading the cards with a gentle touch.

3) Carry an Invisible deck with you as the perfect ‘out’ for a card routine that could go wrong. If you lose a location, miss a move, or simply pick the wrong playing card, produce an invisible deck as a ‘prediction’ you made some time ago.

How to make your own rough and smooth playing cards.

There is a very simple, quick and easy way to make your own deck of playing cards become rough and smooth. If you haven’t heard of him already, Alan Rorrison is a professional magician and one of the consultants to Dynamo Magician Impossible. Alan Rorrison have created a free online video, teaching you the LSQ method to make rough and smooth cards in a quarter of the time it would take to use roughing spray or fluid. Not only is is quicker, but it’s pretty much free of charge as you probably have everything you need already.
Learn it Here