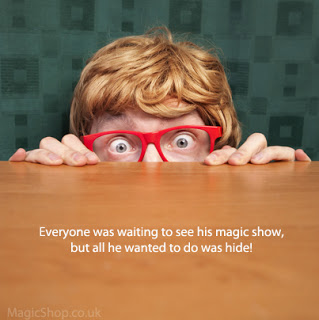 ‘One of my worst problems is the nerves. Once I have started doing a magic trick I slowly get a bit more confident and smoother with the cards, but my nerves just makes most of the performance slow. You can tell I am nervous through my speech and my body language and so can the spectators. It makes me look like a beginner, and I am going to do a cheesy simple trick. Can you help me?‘ – Jack

The nerves are natural, they will never leave you completely, but a little nervous energy is good because it means you care.

I wrote a blog post about overcoming nerves as I used to suffer very badly from shaking hands, and heart palpitations. Once, I even thought about driving away from a gig before I started because the nerves got too much for me (I didn’t and left the gig on a high, as usual).

Here is the link to the blog post on the nerves you may find useful:

This should help, these are the techniques I used to defeat the nerves myself. Like I say, the nerves never go away completely and once in a while they crop up, but it is easy to deal with and rare now (only when you have an important gig or performance).
Dominic Reyes writes:
Hi Jack,
Firstly it’s awesome that you have identified that the nerves are a major problem for you, and decided to do something about it, rather than take the easy option and just stop performing. It sounds like you’re still getting out there, and that’s half the battle won!
We had a long chat about the nerves when performing magic tricks in the shop whilst recording the Merchant of Magic Podcast. Here’s a transcript of the section on the nerves vs magicians.
Keep in mind that the enemy of magicians nerves is preparation. Do you currently script and rehearse your magic, as well as just practice the moves?
Scripting can free up the mental effort needed to keep track of the routine and the mechanics, so you can focus on being relaxed and, as Ben recommends: Slowing down and breathing as you perform.

Remember, that when you’re performing for the public, you are not Jack, the guy who does some magic tricks. You are a magician. Treat that ‘role’ as a form of armor. You are doing a job, and supposed to be doing it. This doesn’t work as well for performing magic to your family and friends, but for the public, assuming the ‘role of a magician’ in your mind, can really help reduce the nerves. I Hope this helps a bit. – Dominic Reyes