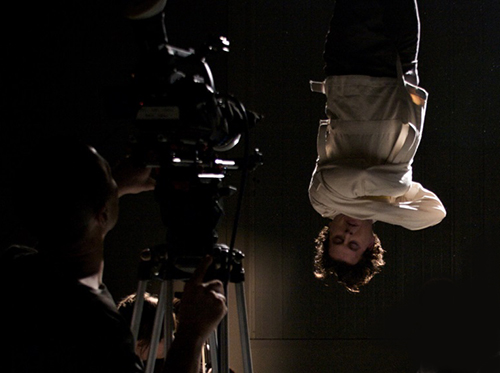 ROSLYN WALKER GIVES ADVICE ON A CAREER IN ESCAPOLOGY

One of the most spectacular, and frequently glamorous, types of magic act is escapology, the art of freeing oneself from restrains under often dangerous circumstances. Escapology is a breed of magic that has been with us since the mid-1800s, the art originating as a by-product of disappearance and transmutation acts, and later developing into a spectacle in its own right. While there have been many great escape artists over the last 150 years, if you’re looking to get into escapology then there is one name you simply can’t avoid: Harry Houdini.

‘He took a very old art form and transformed it into a massively successful performance piece,’ explains Roslyn Walker, a globally acknowledged escape artist, ‘before him magicians would use the ability to escape from cuffs and other restraints in order to perform pseudo psychic demonstrations. He was the first to see the potential of using the escape itself to entertain’.

Following in the footsteps of the greatest escape artist of all time seems to be the primary piece of advice for those interested in developing a career in the business 'Houdini obviously influenced me' says Walker, 'it's difficult for him not to have… history has always been massively important to me and my work. If you don't know and understand what's come before it's impossible to move forward'.

Although Houdini may be the top inspiration for escape artists the world over, Walker argues that it’s important to not be limited by his influence. ‘The time in which he worked was vastly different to now,’ admits Walker, who himself has been voted the 6th greatest escape artist in history, ‘he could get away with escaping a single pair of handcuffs out of sight inside a cabinet and take an hour or more to do it. His audience wouldn’t get bored – try and do the same thing today and you’ll emerge to an empty theatre’.

While Houdini might take over an hour to escape shackles, modern audiences need to be rest assured their attention will be kept for much less time, but with just as much intensity. In a recent major outdoor event in front of a crowd of no less than 3000 spectators, Walker ‘took just over four minutes to free myself’ in a duplication of a famous Houdini stunt.

‘The same rules applied to me as they did to Houdini’ says Walker proudly, ‘I was challenged with the cuffs… I wasn’t allowed to see them until they were snapped on my wrists and I wasn’t allowed to have them taken off unless I admitted defeat, or I escaped on my own’. Furthermore, not only did he gain one-upmanship on Houdini by escaping quicker, but unlike his Victorian counterpart, Walker did it in plain sight of his audience and not behind a concealed, private environment.

The benefits of the job are obvious, freeing oneself to the awe and cheers of a crowd is a wonderful feeling, but on the downside doesn't escapology also have a reputation for being dangerous? While a genuinely good artist is never in any real trouble – after all, it is only supposed to be a show – the act is perhaps still better suited to those who love to flirt with, sometimes literally, breakneck situations.

'My background in circus has really helped me,' explains Walker, who is also a stuntman, 'most escape artists get into the art through magic. They train as magicians first then find escapology'. While this seems to be one of the most popular avenues into escaping for a living, Walker feels that having a more varied background can be beneficial. 'Personally, I think it's an advantage to also have knowledge and experience in other performance arts'.

For further advice on entering a life of escapology from Roslyn Walker, and other famous escape artists, check out the full Escapology interview.