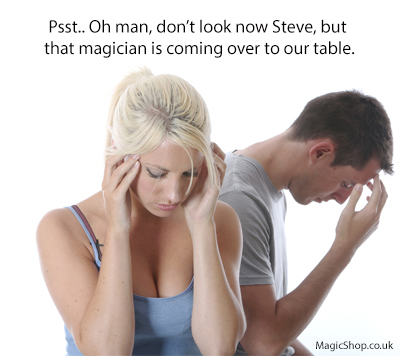 What’s the difference between an annoying ‘show off’ and a highly successful entertainer? Why do some magicians constantly annoy people?


Have you ever seen skilled magicians that you simply don’t like? They may be highly recommended magicians, but for some reason, they rub you up the wrong way. Why are some magicians great at entertaining people, whilst others simply come across as show offs?


I don’t think the difference is talent. There are hugely talented magicians who seem to be nothing more than self promoting egos. Yet at the same time, there are highly successful magicians who only perform very simple techniques, yet hold everybody spellbound.

I suspect it’s about the choices that the magicians have made when they have developed their performing characters. Without thinking about how they come across to spectators, some magicians fall into the trap of believing their own hype, whist as the same time, becoming generic and interchangable in their performing persona.

I've found that the following characteristics can be common in many magicians who have not taken the time to think about their performing character:

Lets look at a few ways to avoid these characteristics that lead to magicians annoying people with their magic:


Use your natural personality

Be who you really are. Develop a stable consistent version of your own characteristics that you can project into your performing style. This will give you a unique and predictable character that audiences will believe in.

You’re goal is to entertain and delight people. It’s not a game between the spectator and yourself. Try not to push yourself into peoples conversations, force magic down peoples throats and demand to be the centre of attention.

You may be a skilled performer, but that doesn’t mean you are better than your spectators. You don’t know who they really are, or what skills that may be an expert at. It doesn’t matter how many years you have been practicing your sleight of hand, or how good your misdirection may be. It’s totally trivial to anyone who doesn’t care about it. Don’t fall into the trap of thinking that you are special, simply because you are really good at fiddling with playing cards, following magic trick instructions, or because you can be charming. Respect everyone you show your magic too. Don’t let the status of a magician go to your head. There are experts in their own fields everywhere. Looking down on people is a sure fire way to lose work, and fail as a magician.

Avoid terrible jokes and one liner gags as much as possible. It makes you look cheap and generic. Add your own humour and style. Be witty and comic if that suits you, but smutty jokes and put downs make you look ‘low rent’.

Think about all your best characteristics. Take a moment to write down all the best things people like about you. If you are feeling brave, ask some trusted friends to write a short paragraph about what they like about your character and personality.  Once you have this list, look at ways that you can communicate these characteristics into your performing persona. Perhaps the backstory to your magic powers? Maybe by using presentations that describe a story about you, and how you reacted to a specific situation?

Look at one liners that you may use, and the jokes and gags you like using. Do they fit with the description of the person your friends have described? Decide WHO you want to be. You are what you do, and because of that, you have control over how you will be perceived by your spectators. It’s a fantastic opportunity.