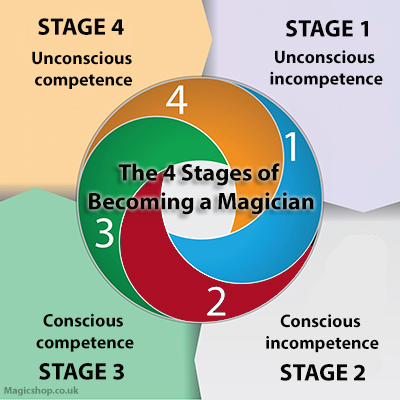 How do people decide to learn magic?
Why do most people enjoy watching magic, but becoming a magician is rare?

I think this has a lot to do with 4 stages of becoming a magician:

Remember what it was like before you became interested in magic. Maybe you were just like the majority of people that watch magic on TV? You enjoyed seeing the show, being entertained, and fooled by a magician.

Have you ever watched a Cirque du Soleil show? It’s a wonderful experience, seeing the incredible feats that the acrobats achieve. Most people love to watch it, but don’t have any desire to understand the practice process that the acrobats go through, or the construction and specifications of the springs, trampolines and wires that they use to perform their show. That’s how the vast majority of people view magic. They don’t really want to understand how the magic tricks are done.

Because you are reading this blog, I assume that you are a bit different from the people I have described above. You wanted more from the magic tricks and magicians you watched. At first you didn’t have any technical knowledge of how any magic tricks were performed, but the desire to explore and understand the secret of magic was inside you.

This thirst for more information often leads people to seek out the skills they know they don’t yet possess. You discovered that you have a drive to investigate and learn magic. At this stage, most people will spend a great deal of time theorising about how magic tricks are done. They conduct searches online like ‘How did David Blaine push a needle through his arm’ or ‘How did Dynamo put a phone inside a bottle’. They have the desire to learn magic, but lack enough knowledge to perform it themselves.

Maybe you stumbled onto a magic shop website or discovered an introductory book on magic in your local book shop? Perhaps you met someone who was already performing magic, and he or she showed you a few beginners tricks?  The main difference is that you became aware that there were skills that you could learn yourself. You understood that YOU could also do the magic that you saw other magicians perform. You began the process of becoming a magician.

I’m going to take a guess and say that you are now at this stage in the process of becoming a magician. You’re in good company as most people remain at this stage their whole lives. The majority of magicians know a great deal about magic, yet they remain in a state of conscious competence. They consume as much information about magic as they can. They learn basic card magic technique, and build up a range of self working magic tricks and basic sleight of hand that they practice on a regular basis. However, they never really feel that they have mastered any of them to the point that they are automatic.

Do you find that performing a magic trick requires all your concentration and effort? Although you can perform quite well whilst practicing alone, do you tend to freeze when it comes to performing to other people? Do the mechanics of your magic tricks take up all your attention and effort?

If you find yourself identifying with these questions, I have some good news for you. You are right on the verge of the final stage of becoming a magician. You have the knowledge and technique, but need the experience and practice to make the mechanics fully automatic. To push past this, you simply need to narrow down your material, focus on a small range of techniques and tricks, so that you can practice them over and over again. Your magic practice should be structured, consistent, and involve both solitary repetition and live performance practice. The aim is to reach total familiarity with the mechanics so that you can move beyond conscious awareness of mechanical process. You can’t do this if you are constantly jumping from one new magic trick to the next. You have to commit to a limited amount of material that you can repeat over and over until it’s mastered.

Most professional magicians have a small set of magic tricks that they call their ‘working material’. This has been practiced and repeated to the extent that it has become second nature. The magician is so familiar with the mechanics that they can be performed whilst executing another task, such as delivering a patter line, or reacting to a spectators comments. This is the ultimate goal of a magicians magic practice.

How many magic tricks do you know that have been mastered to this extent? Perhaps none? Maybe just a handful? The ultimate goal in magic practice is to build up a range of magic tricks that you have unconscious competence over. The best way to do this is one trick at a time. Why not choose just one of your favourite magic tricks, and make the commitment to focus all your attention on it until it reaches this stage of mastery? I guarantee that you will find this transforms both your magic and your performance skills beyond anything you ever dreamed possible.

Reference: Noel Burch developed the Conscious Competence Ladder in the 1970s. It has been attributed to Abraham Maslow, although it doesn’t appear in his major works.