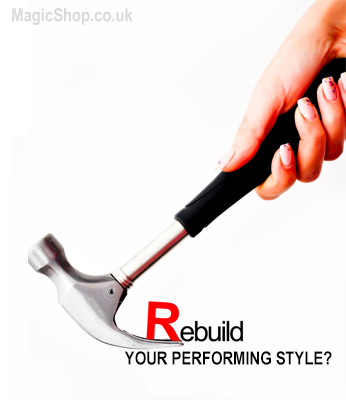 Real or magic trick? How using mystery instead of comedy within your magic can improve the reactions you get.

How do you perform your magic? Do you show tricks as real or magic? Do you entertain through comedy or mystery? More importantly how would you like to perform? I would like to share with you some of the changes I have made to my magic and performance over the past decade.

My performances have certainly grown and become better, and better the more I perform, it is only natural that this happens. However, my style has varied immensely, I have gone through many changes in order to find my feet and land somewhere comfortable and natural for myself. I am hoping that by sharing my progressions, I can inspire you to look at your own performance style and adapt it to make you more comfortable within yourself and ultimately help you become a better performer.

How I started presenting my magic tricks.

When I first began practicing magic I was 17, nearly 18 years old, this does seem quite old, although I did have a love of magic and all things mysterious all of my life. If someone presented me with a puzzle or a riddle I'd always want to work it out, rather than be told the solution.

I began presenting classic magic tricks that have become classics since David Blaine performed them on TV such as the Invisible Deck, the Bitten Coin, Balducci Levitation and other selfworking tricks. I really felt like magic was real when I first saw it being performed. I may be laughed at now, but when I first began learning magic I had no idea what I was going to learn. Would I actually be learning secrets on how to manipulate metals and thoughts? When I began learning the secrets I grew a passion for method as much as performance; I found why and how these magic tricks worked to be just as special as showing them to people.

How I changed how I perform magic tricks.

It is not this side of things I would like to discuss in depth though. I would like to talk about the growth of my style as a performer. When I first began performing magic to my family and friends it was great but tough as it wasn't so much the tricks I had a problem with it was how to act afterwards. I did not want to insult my family and friend's intelligence (they would then simply call me out anyways if they didn't believe what I was saying) but I also didn't want to say out wasn't real. I performed magic as if it were real but felt uncomfortable doing this due to the scrutiny I would be given after a performance, I didn't have the people skills or confidence to handle these situations. However, it stands that I would perform it as real and try to be kind and gracious about it, I never performed with a holier than thou approach.

I then began performing magic professionally; I would take out every gimmick I owned and try to plan a different trick for everyone and quickly found it was a tough call to organise myself in this manner. I had never had any tuition; I had never met another magician who helped guide me. I didn't know about things like pocket management and how to build a set of tricks. I couldn't have told you the best tricks to perform at tables as opposed to walk around, I was going in 'cold'. I learned a lot very quickly, like how to manage my props and the best set of tricks to perform and that I didn't have to do a different trick for everyone; I could perform tricks over and over again. My style also changed at this time.

I began telling more jokes, by this point I had become a member of my local magic society and was receiving some helpful tips from professional magicians that attended that society. It was a very valuable learning experience. I had also began working here at The Merchant of Magic and the help that Dominic Reyes gave me was great, he helped me feel confident and helped reassure me of things when I wasn’t sure whether what I was doing was any good in comparison to other professional workers. My confidence grew as a result of this and all of the experience that I had gained performing at gigs.

I worked a lot of corporate gigs, and I always looked a lot younger than I actually was, so I never felt completely in control. Not until I learned a few stock lines that I could rely on to get a laugh and relax people. This is where my magic really changed I have dabbled in pickpocketing, mentalism, body loading and watch stealing, even magic tricks that rely heavily on misdirection such as chip on shoulder or coin under watch. I would make people laugh and have fun, and the magic was secondary, my job was to entertain people. I did this for a very long time and became very comfortable, in fact; I became too comfortable. I would laugh and joke with spectators and even tell them magic wasn’t real if I felt that it helped misdirect their mind away from trying to figure something out. For a very long time, I performed like this; there was nothing really wrong with what I was doing. The only problem was that it didn’t suit me as a performer; this style did not give me what I required. So I decided to try something different.

A new direction for my presentation.

I have in the past 12 months really begun reframing how I perform, watching old reruns of David Blaine and Derren Brown really ignited something in me. It made me realise I was hiding behind the comedy I used as I didn’t have the confidence to use mysteriousness as a form of entertainment. We as magicians love mystery; it is what we are all about. An alarming amount of lay people absolutely love mystery as well; they may not like being fooled but being fooled and being mystified are two different things.

To fool someone is to trick them, to mystify them is to fill them with wonder and hopefully give them an experience that will last for the rest of their lives. When magic becomes a topic of conversation you will always pop to the forefront of their mind. I have rephrased my patter to say less, I have streamlined my performances to cut out the jokes and one liners and replaced them with moments of silence, maybe a thoughtful pause. This type of performance leaves the spectators room to decide themselves whether what they are seeing is real or not. My good friend Dee Christopher opened my eyes also; he told me that if you tell everyone it is trickery then they will enjoy it, but you will soon leave their mind and become a distant memory, after all it was just a trick! However, if you leave it up to them to decide, and present it as confidently as possible they then have a whole World of paranormal and unknown theories to hypothesize about. You are leaving that door open for them, instead of closing it by disclosing that it is all trickery and sleight of hand.

This has been firmly cemented by meeting a very amazing person at Blackpool magic convention. His name is Peter Turner, and he is a mind reader. His great style of extremely clever scripting and boldness has allowed him to leave people with legends to tell of his abilities. He seems to employ no methods at all and can just reach inside your mind, trust me; he did it with me! One of his theories is to be bold and take chances; if they don’t pay off move on, if they do, then take credit for it.

A very simple idea, for example, is to use an Invisible Deck and to ask someone to think of a card and to repeat it in their mind over and over again. Now a year ago or further back I would have said,

‘Please don’t think of the Ace of Spades; it is far too common.’

Instead, now I simply say,

If the spectator is thinking of the Ace of Spades then you have a hit, it will seem like for that moment you plucked the card out of their mind. If they do not react, then they have simply taken your sentence as an example of what to do.

Just by rephrasing the way you bring the Ace of Spades into the conversation you can gain an effect from nothing and create a moment for your spectators. You will not only guess this card but also predict the next card that they simply thought of.

Suffice to say that this new direction I am going in feels much more rewarding for me, I am back to performing magic again and not just tricks. If you feel as though you wish to do this too then be bold and try different things, find your style, I guarantee you will feel even better after performing.