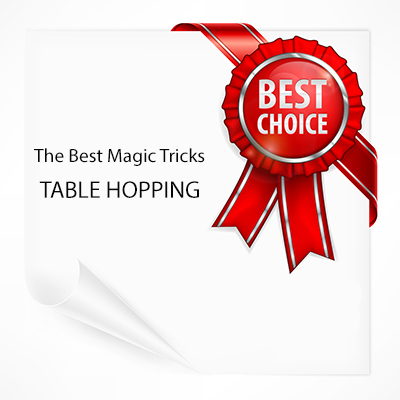 ‘I’ve just done my first magic show and have been asked to be a table magician, going from table to table in the venue.  I’m a street magician usually, I don’t have much of an idea of what sorts of magic tricks I could perform at this party, and wondered if you had anything that you could suggest?

My act so far will include things like: Twilight Angels, Ghost Decks, The Invisible Deck, some mind reading card tricks, etc.

What else can you recommend?‘

Congratulations on your first show, being booked again is a great affirmation that you did a great job performing!

Table Magic really is a little different as you really need to address the whole table at once. It can be awkward if you only show a trick to a couple of people on the table. The only time I would ever perform for a couple of people on a table at a time is if the tables were very long, I would then work my way down and around the table. Every once in a while the venue will be too loud (even if I shout), in instances where I cannot be heard by the people at the other side of the table I may break my performance down and perform to smaller groups around the table. The goal is to present for the table as a whole ideally.

I find the best magic tricks are those that can be elevated so they are performed nearer to your face. Rope routines, Chop Cup and card to wallet are a few classic routines. If you want to look further into these ideas I highly recommend the following tutorials/props:

Some magicians are happy to spend time prepping their magic for gigs. If you like to prep some of your magic then here are a few suggestions you can try out that will leave your spectator’s with a magical souvenir.

Labelled and Relabelled by Ben Williams

Trace by Will Tsai

These are fun, visual routines that require a bit of prep, but have maximum reactions.

There is also a plethora of magic that would suit table performances that are performed with borrowed objects, these always get great reactions as you are using something of theirs. Usually the borrowed object is of value so you must be insured (check www.equity.org for details about performer’s insurance) should you wish to perform these in public. With that said when performing with borrowed objects the reactions can be huge as the spectators know their item isn’t a magic prop! Check these routines and props out for some great suggestions.

Nest of Wallets – By Nicholas Einhorn

Hide and Seek by James Brown: There are some great routines with borrowed phones and bank cards, very cool stuff!

You only have to do two or three routines per table, if you have more time you can go back to the really good tables and then show them things like Twilight Angels and some of your mind reading, they will be a lot more receptive to it then and you can make your performances a bit more personal.

What the magic community thinks

Here’s what the magicians on the Merchant of Magic Facebook Page recommend:

Sean Mccarthy It really depends on when the gig is. If you have time to learn new material then I highly recommend iCandy by Lee Smith and Gary Jones. It has some wonderful close up magic. It is generally a bad idea to go to a gig with new material so if you don’t have the time to learn new material PROPERLY, then just stick to the effects that you already know. A lot of what you already do works in this environment. Invisible deck and twilight angels are very solid effects for tables. The best advice I was ever given was to slow down, and make the trick entertaining.

Connor Elleston If you wanted to keep a running theme of playing cards, you could add in Omni Deck or Bug-O-Me as a powerful closer.

Jason Spear Take your street style to the table. At each table notice what props people are wearing. Rings. Laced shoes. Wallets. Coins and notes etc. then add your card effects. If you usually perform street try not to be tempted to call all the tables over and perform for them all at once though lol

David Punter Any word by Ben Williams is my fave trick to perform at tables.

Andrew Skinner Or you could be honest and tell the organisers that your style and repertoire doesn’t suit table-hopping. Trying to adapt your act or learn new material in time may not work, leaving you less than confident. That could then disappoint you, the client, and their customers. In turn, the image of magicians as a whole could suffer in their eyes, making it harder for others to get work or to impress. Controversial viewpoint perhaps, but the best thing to do might be to leave it to someone who does table hopping for a living, and stick to engagements where what you do best will really work.

Martin Jones Mark James‘s Chop Cup routine (supercharged classics DVD set) is amazing if you are competent with a Chop Cup! If not, learn it and use it at your next opportunity.

Francesco Mattiello street magic is still close up, so your material will work fine, I’ve used the effects mentioned a number of times while table hopping, works just fine, be confident, wear a smile, make a connection and astonish them, good luck!

Simon South Do the street act but close up!