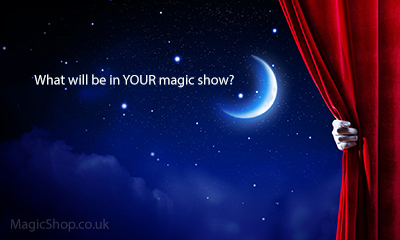 Ed asks: How do I build the magic tricks I already do into a working act I can use for gigs?


If you've been learning magic for any length of time, it's likely that you have already built up a range of magic tricks you can perform sufficiently well to perform to spectators. If you don't feel that you've reached this stage it means that you need to carry on practising and rehearsing until you've gathered together a collection of magic tricks that are at the stage where they ready to be performed. However, putting together a commercial act isn't just about mastering a group of random magic tricks. You have to add some organisation to the magic you are going to perform if it's going to be suitable for performance to the public. An important part of this organisation is grouping together your  magic tricks into acts and then those acts built into a show.


The difference between an act and a show.


For magicians, an act is a small group of magic tricks which work well  together. It consists of openers, bridging tricks, and closers. The magic tricks flow well together, building energy and excitement at a steady pace, and reach an exciting climax. Essentially, the whole act should contain all of the elements of entertainment that are found within each individual trick itself. This unifies the collection of magic tricks into a group that works well together. A typical magic act may only be about 10 or 15 minutes long.


An example of this is the new magic TV series Killer Magic. In the TV magic show, 5 magicians compete to perform magic tricks in front of each other. Each magician takes turns to perform a trick and the other magicians award points for the tricks performance.


The TV show is divided into acts. Each magicians trick is performed and then feedback and points are awarded by the other magicians, that's one single act. Now another act starts as the next magician performs their trick. After all the acts of been completed, the lowest scoring magician has to  perform a magic trick as the finale to the show. The last magic trick is the final act. Each of these acts are presented together to fulfil a common purpose; choose a winner for the show. In this way, the collection of acts produces a greater meaning than the sum of their individual parts.


Using acts in close up magic.


Close up magicians build small acts for different parts of their bookings. They use short, fast resetting, angle proof, and punchy magic tricks for walk around conditions. For magic at the tables, magicians choose magic tricks that will engage a large group of spectators in a slightly different way than the magic tricks they've used for walk around. They grouped together magic tricks into balanced acts that are suitable for each of these working conditions. The acts may only be 5 or 6 minutes long, containing 3 or 4 tricks. Because magicians will be performing to various groups through an event, they may build together many acts that are suitable for each working condition. Having different acts for the same type of situation allows the magician to perform magic to groups that may be close to each other without having to worry about repeating a magic trick. Because the magicians are performing to small groups for a short period of time and then moving on to another group, they don't need to think too much about show construction. However, sometimes the magicians will be asked to perform from a longer period of time to a fixed group of spectators. That's when show construction  becomes crucial.


If you wish to perform magic on the stage, as part of the children's magic party, or as an after-dinner entertainment, you need to start thinking about  building a larger set of magic tricks that will play for anything up to an hour. Constructing a show is about grouping together your magic acts around a common theme. You need to think about the story that will be the framework to your show. Once you have a story, that has a beginning, middle, and an end, you can choose magic tricks that will fit into a group of small acts that create the show. It's important that you've choose the story first before you select the magic tricks which will tell the story. Random unrelated magic tricks can't easily be put together to create a show. If your magic tricks are not presented in acts that come together to tell a great story, the show will seem wrong to your spectators, it will lack something. Even TV magic shows which present a series of random magic tricks divide them into acts which communicate a greater message. For example, Dynamo Magician Impossible presents magic tricks that are unrelated to each other, each magic trick is an act, tied together by a story of how Dynamo grew up and found inspiration for his magic.


Think about some stories you would like to tell.


Thinking about how you present magic tricks is just as important as practising the mechanics and performance of the tricks themselves. Good magic is not performed in isolation. You probably already know enough magic tricks, the real skill comes in using that magic to entertain people. Building your magic into an act and then each act into a show will help move you forward far more than learning another magic trick ever will.