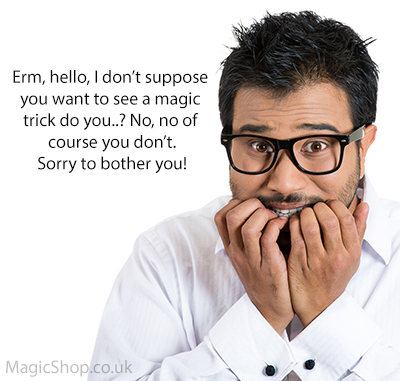 Magicians worry about how to approach people to show them magic tricks, but it's much easier than they think.

Practice, practice, practice they tell you in the magic books, but there's never much information about how to start your magic tricks off. How do you approach a group of people and start performing your magic?

Dominic Reyes recorded this short video about how he approaches people to show them magic in a close up magic setting.

Magicians that haven't performed to the public often tend to worry about how they are going to start off their performance. They may be confident in the magic tricks they perform, but approaching people isn't a magic trick, it's about confidence as a performer and overcoming fear of being rejected.

As a magician, you are there with an official role to play. Your job is to approach guests and show them something amazing. It's just as valid as any other person at the event and you should take comfort in that. You have a purpose for being at the event and you are no more an interruption of the guests time than the waiters that offers them drinks or canapés. Relax into the role of the magician you are playing.

The three keys to approach people to show them magic tricks.

Approach a group with a relaxed smile and a confident stride. Do these 3 things:

3) Engage them in a conversation or activity.

'Hi, I'm Joe Blogs the magician. I've been asked to show you some magic'

The line above covers the first 2 keys to an introduction, but it doesn't invite engagement. Adding in a question or an activity will make the introduction more effective:

'Hi, I'm Joe Blogs the magician. I've been asked to show you some magic tonight. Do you believe in magic?'

'Good Evening, I'm Joe Blogs the magician. I've been asked to show you some magic tonight. Do know why I carry these strange coins'

It's really as easy as that. Just like any introduction, it's about the APPEARANCE of confidence and purpose. It doesn't matter if you are feeling nervous about the approach, as long as you don't show it. If you edge slowly up to a group and fail to make eye contact or smile, you are giving signals that you don't want attention, that's exactly what the group will offer you. Approach with purpose. You have something very interesting for them and they are the lucky people to get to see you next.

Approaching strangers to show them your magic tricks is one of the most common areas of fear for magicians, but it's as simple as any introduction. Taking time to practice introducing yourself will be time well spent. As you gain experience, you will discover that it's not as hard as you imagine.