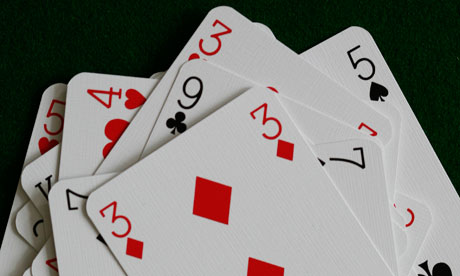 Are Bicycle Cards worth the money? Would it be better to use cheap playing cards for practice?

We posted a customer question asking about Bicycle cards for beginner magicians. Should beginners use Bicycle cards? There was a lot of feedback from magicians, so here's some of the great advice:

Duncan Clarke –  Bicycle all the way.

Brian Clarke – Waddingtons, available at most newsagents and stationary stores in the UK

Sean Mccarthy – Phoenix cards are the best on the market quality wise. Bikes are standard and most gimmicks come in bikes. I would say get bicycle cards if you are starting off. If you have been doing magic for a while you should seriously consider the phoenix deck. After that, style and personal taste may affect your choice (I personally love the black noc deck).

Peter Curly Galloway –  I find bicycle cards a little too slippy to start with. But after a while they are perfect. & last ages.

Chris Curley – A shoddy workman will always blame his tools. Bicycle cards are too pricey in the UK if he is only just learning and from personal experiance when I started I bought either waddingtons (£1) or just standard plastic coated cards (70p). Bicycle cards are great and are pretty much the standard but I know kids change there minds quite alot so next month he might not want to do magic and to be honest the pricey cards you speak of just look better and as a purist where cards are concerned I have never met a deck of cards that have ruined my ability to do tricks and sleights as I have and still do practice with every type of card I can get my hands on.

Alan Penman –  Very cheap cards can be difficult to work with. However bicycle cards are not too expensive and worth it. Only spend extra to impress that special someone. Lol

Jonathan Nicholson – The standard USPC bicycle cards are the most popular primarily as any "gaffed" or specially customised decks are made with bike backs but the new trend in "cardistry" and flourishes often promote bespoke or limited release decks as their tools of choice (and their marketing is powerfully good at creating a demand) but the truth is just as all the previous comments have suggested… A good card trick can be performed with ANY pack I cards regardless of design or price tag. A deck of bikes can be used for just about everything but if he is more into the decks than the tricks then it's about personal choice in back design

Dan Wan – Bicycle plastic cards? A bit more expensive but last ages, not as good for sleights but fine when you are learning.

Matthew Ramsell – Standard bikes are all I ever use

Brent M Braun – I would say it depends on what kind of sleights he is working on. I couldn't imagine learning Faro shuffles with "Kentucky bikes"

Yann Champion – Bicycle Seconds if he's into magic. Tally Ho if he's really into cardistry and want to try something else.
He doesn't need anything else. But good luck to make a teenager understand that fancy decks are marketed towards kids and that magicians in the know don't care about them.

Geoffrey Hubbard – I find Waddington playing cards are great for the price. The better you get, the more you pay. My opinion only.