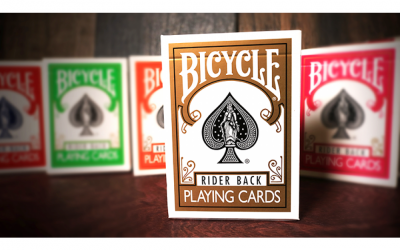 In this article, I will explore and share to you some of the significant parts of that history, including its roots, how the Ace of Spades “Duty” Card came about and how these playing cards spread across the world. We will also explore the development of its design and how the rise of the US Playing Card Company as the world’s leading manufacturer of cards, came about. Let’s start. 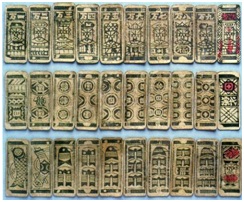 It would be accurate to start the history of playing cards in China, where it is believed to have originated. It is in China where the idea of playing cards first became widely popular and accepted in society. Later on, the amusement people enjoyed from playing cards spread to Persia and India before later on bringing its popularity in Egypt during the control of Mamluk’s era.

It was only after it arrived in Egypt that it began to slowly become accepted in Europe through the Iberian Peninsula and Italy during the latter half of 14th century. This is the main reason why the playing cards you find in Europe usually have Islamic symbols and derivation in them. It may be more accurate to attribute the spread of playing cards in Western Europe to a diversity of cultural and religious reasons during the fifteenth century.

The earliest packs of playing cards that were recovered from archaeological research showed that the artworks behind the cards were hand-painted, making them incredibly more expensive than the generic ones that we have today. This also means that only the upper elite class and patrons with large wealth can often enjoy playing the cards.

The History of Playing Cards Design

The history of playing cards design changes according to the religious and cultural changes in the society. For example, in the 13th and 15th centuries, society witnessed fundamental religious and economic changes brought on by new technology. New trade routes were discovered across Medieval Europe, and its centres of trade shifted from town to town. There were new economic systems discovered. Merchants and craftsmen found a new and better way of doing business. When all of these happened, people’s purchasing power ability increased and successful traders wanted to show off their fares with luxury items. To address these changes, manufacturers of playing cards designed luxury cards that were meticulously designed to fit the renewed discriminating taste of the card players.

In the latter part of 16th century, people began to develop new ways of categorizing and classifying their experience. Their ideas, outlook, and perspectives in life changed because of technological advances. They now discovered concepts such as lunar cycles, virtues, heavenly bodies, taxonomies, and hierarchies. When these ideas came to rise, the design of playing cards also adjusted. They now had designs that could help people use cards not just for playing, but as a means of sharing and condensing new ideas in heraldry and botany to people. There were even educational cards designed by Thomas Murner in 1507 as a form of political satire on the use of playing cards.

Regarding how these designs developed, historical archives from Barcelona showed that Rodrigo Borges who came from Perpignan is claimed to be the earliest playing card maker today. There are other people who were mentioned with him on the list, which include Jaime Estados, Antonio Borges, Juan Brunet and Bernardo Soler. The designers of all these creators’ cards were artisans, craftsmen and artists who used engraved wood and woodcuts gilded and painted to depict the current times.

The earliest playing cards we have today

It may interest you to know that the earliest cards that still survive today would be traced from the fifteenth century, and the designs were mainly made using a pasteboard and 3-6 sheets of paper that the card creator wholly glued together. These cards usually are printed and hand-drawn from different types of woodblocks and copper engravings, which made them look like their pieces of art. During the early days, it was customary to focus all the design on the faces of the cards and leave the back plain, but this was later on changed because cards with plain back designers were easier to stain, and the players would be able to find out what the card is from that stain. It was also common for the card designers before to use stencils to make their designs. Some of the more common designs they made were depicting everyday objects, such as flowers, falcons, hounds, clubs, cups, ciboria and hares. 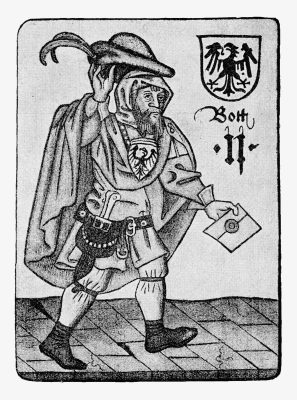 Later on, when the Medieval mind developed a new taste for more complex designs, there were now more colour and details added to the new designs of the cards. There were even designers who used the playing cards as a template for their artistry and miniature design skills.

Moreover, the rise of suit symbols in the playing cards may have easily started with how the Chinese developed “Money” cards. This design spread across Europe and was integrated into the adaptation of various Islamic design symbols, including polo sticks, coins, cups, and swords. Some of these designs were harder to interpret. For example, the Europeans didn’t really know what polo sticks were and so reassigned their names into “batons”. This new name is what is now commonly known as the “Latin” suit signs. These suit signs, later on, spread across Spain and Italy until the French interfered and designed their own. Their “French” suit signs became more popular at the time because they were easier and less complicated to replicate and reproduce.

When playing cards reached the shores of Western Europe in the fifteenth century, new printing techniques were discovered and applied to the development of newer styles of playing cards. At this time there were already new designs that evolved from the distinct culture of the different regions in the area. The standard patterns already based themselves on a particular region’s taste, preference and social affairs. During this time, we can already see suit symbols depicting court hierarchy, Kings on horseback or seated in thrones, Queens with their attendants and horsemen dying with their foot soldiers. There were even designs with trump cards or more than four suits. There were even suit designs that had designs of everyday items, such as flowers, animals, and helmets. Packs with suit symbols of crowns, pennies, rings, bells, leaves and acorns were also common. 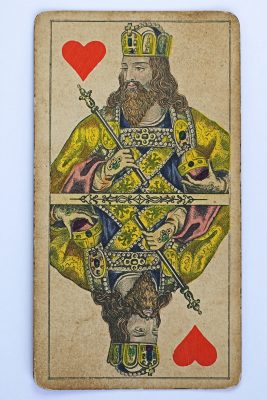 It is speculated that these developments in the design of such playing cards were mainly from artistic and iconographic traditions today. The era’s contrasting aristocratic, imperial court and feudal hierarchies were also common factors that contributed to these card’s new designs. Other factors that historians claimed to be big contributors to how these designs came about include the exportation of artisanal products, fashions in clothing, migration of different craftsmen, as well as the conservative and liberal tendencies of the people.

Playing card designs are always fluid and forever changing. For example, in the 16th century, when Portuguese mariners presented the latin-suited “Dragon”designs into Japan, they were banned during the prohibition in 1658. However, they reappeared a few years later in its disguised forms, which evolved into different types and forms. Some of the new adaptations included the alteration of the dragon design on the aces into a King symbol that was better accepted by Japan. Similarly, the Native Americans reinterpreted the Spanish suit symbols to fit their culture. They reinterpreted the sailor symbols used by Spain and kept those designs even after the French-suited cards arrived from Europe.

In the late 15th Century, the designs of card makers from Germany also reinterpreted the Italian and Spanish suit symbols through the use of elaborate, engraving techniques that were unique in Germany’s gothic roots. These new designs were then marketed to different regions and influenced the creation of locally designed counterparts.

Another interesting part of the design history of playing cards is how they were made. Evidence showed that the early packs of these playing cards were hard to produce and time-consuming because they had to use a pasteboard system, which involves gluing stacks of paper together but results into a more sturdy form of playing cards. Several sheets of paper were glued tight to produce expensive cards that were only enjoyable by the few. These cards are also made more expensive by the fact that goldsmiths and engravers were hired to give colour, illumination, and style to these cards. No wonder that these expensive luxury cards were given as heirlooms, wedding guests, and collector’s items. Some of these expensive cards were even used as curios for display cabinets in the palaces of princes. 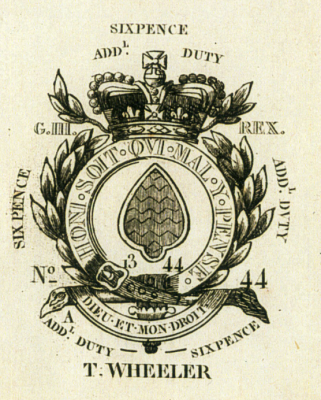 The rise of the Duty Ace of Spades card in 1828, also known as Old Frizzle, it came about as a form of a symbol that the duty to pay a shilling had both been reduced and paid already. This system was a common practice until it was changed in 1862 when the three penny duty wrappers were made more available. The new system also allowed players to use whatever kind of design they chose, but people chose to stick with the Ace of Spades, which makes it more popular today. It is due to this popularity that the symbol of the card manufacturer is usually Ace of Spades.

The US Playing Card Company is now 150 years old. With headquarter in Kentucky although originally starting in Ohio. The history of the company is also fascinating to explore. Did you know that in 1867, when the company was founded, US Playing Card was first named as Russel, Morgan, and Co? It started as a printing shop, but its manager Colonel Robert J. Morgan later hired a New York entrepreneur named Samuel J. Murray to expand its operations. The creations Samuel had patented increased the production of such cards in the company’s Norwood Ohio plant. With his new patents, Murray was able to change the game and lowered the production costs. With Murray’s new way of adding enamel to the cards, he was able to help increase the production rate of the company. After that, the rest is history. 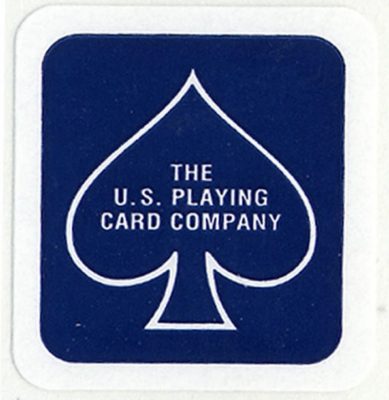 The Seal of the USPCC

U.S. Playing Card Company is now  the top card manufacturers in the United States, and since its boom in 1891, it started buying out the smaller scale card producers of the time. These include the New York Consolidated Card Company and the Standard Playing Card Company, which were the thriving companies that wanted to compete with USPCC.

It’s also an interesting history of playing cards trivia question for you to know that USPC was a supporter of the wartime soldiers in the United States, and  in World War 2, USPCC was in partnership with the government to create spotter cards that could help the soldiers trace their enemies’ location. The U.S. Government also collaborated with USPC to create clandestine decks that could hide secret maps to their escape, which could be revealed after peeling apart the cards.

I think I’ve shared enough with you in this article some of the essential facts about the history of playing cards. Now that you learned some of these facts, you may want to share what you learned in some of your presentations or routines. You are working with a fascinating prop, steeped in history.

Want to learn more about the history of playing cards? Visit the English Playing Card Society

Do you have any facts about the history of playing cards? If so, please let us know in the comments section below: