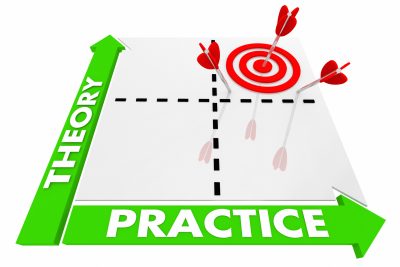 Those are words that, as magicians, we’ve ALL heard at some point or another.

‘You should study more magic theory! It completely changed the game for me.’

‘Magic theory is pointless! Why waste time studying magic when you could be DOING magic??’

Both are very valid points.

Today I’m going explain why you need to draw a balance between study and practice, by contrasting TWO experiences I had recently.

I personally had my first real ‘taste’ of the world of magic theory when I dove into Strong Magic, by Darwin Ortiz.

For anyone who doesn’t recognise that name, Darwin Ortiz is one of the ‘greats’ of modern card magic and when I say he wrote the book on magic theory, he really did.

When I first bought Strong Magic I was expecting Ortiz to spill the secrets on some of his coolest routines. I was waiting for finger-busting sleight of hand moves, incredible pointers on card manipulation, and at least the secrets behind some of his ‘workers’.

Did I get a single one of those things?

Instead, I read not about card manipulation but AUDIENCE manipulation; how to get stronger reactions for your magic. It suddenly made perfect sense to me; why should I be focusing so hard on my sleight of hand whilst neglecting the fact that I could barely look my audience in the eye??

I found a ton of useful tips and in-depth lessons within the book, too many to cover in one post so here’s ONE example of a lesson on structuring your magic routines I learnt that turned out to be really helpful..

Let me tell you something. When I was starting out in magic, if somebody didn’t react well to a trick I did, can you guess what I would do?

Yep. I’d throw another trick at them. And another. And so on…

I had this irrational idea that I could force someone to enjoy magic if I just showed them enough. As I’m sure other experienced magicians can confirm, this tactic doesn’t work.

Instead of throwing as many tricks at your audience as you can, focus on developing THREE killer tricks. I have since made it a rule to NEVER perform more than three magic tricks in a row. This is because it gets harder and harder to impress people the longer you perform for them. That’s why I highly recommend the following structure…

Your first trick should be something visual and attention-grabbing that won’t take long and preferably doesn’t take any lengthy patter.

Good examples of a hook might be the floating card or a card production routine.

What you really are trying to do is capture your audience’s curiosity so they are ‘primed’ for the next trick.

– Second trick, the ‘weight’ of your routine

Right bang in the middle is where you’ll want to be doing your longer tricks that involve more patter. Right now you’re in the perfect position; you have their attention and will be able to really ‘milk’ this second trick.

For example, this would be a good place for an Ambitious Card Routine.

You want to save your strongest material to the end. Your audience are usually going to remember how you started and how you finished; so make sure you end with a trick that has a great ‘twist’ or ‘kicker’ ending to leave a lasting impression.

For example, when I finish my routines I like to use Cube 3 because NOT ONLY is it a great trick that is highly impressive, I work in a ‘kicker’ ending where the previously selected card in the second trick is actually inside the cube.

Did I see results?

Absolutely. I stopped trying to shove ALL my magic at people in one go, and was able to see much better reactions. There’s a reason the top restaurants serve small portions (it leaves you wanting more rather than feeling sick of it!) and it’s exactly the same in magic.

Now, I like to compare this experience of applying theory to something practical.

Last summer, I found myself in a position where I was with a bunch of people who didn’t know I did magic, and so I got to test out my tricks in person on LOADS of people.

I’m talking two or three months straight of just performing magic for people. At the time, I wasn’t analysing anything or trying to read up on theory, I was simply seeing what got the best reactions and doing more of that thing.

It really was a very simple process that allowed me to become just a little bit more effective every day. And over time, that led to some AWESOME results.

Now, this was WAY before I started digging into books like Strong Magic so everything I did was purely intuitive and what felt right based on experience. And it worked! My magic got a whole lot better.

So the question is, which taught me more; practical experience or theory?

This is a really tough question to answer.

One the one hand, my eyes were completely opened to a whole new side of magic through my reading. However, the experience gained through performing taught me the same lessons – but subconsciously and more gradually. Reading about the theory was a ‘light switch’ moment whilst practicing manually was more of a gradual sunrise in comparison.

In the end, both reading and performing have the same end goal; improving your quality of magic and the way you interact with your audience. Both will take you to that goal; it’s just a question of which is quicker.

The best solution would be to find a healthy balance of both; read up on your magic theory WHILST applying the lessons you learn in a practical situation. That way you not only gain the muscle memory of what works, but also understand WHY it works.

Thanks for reading! I hope this helped you out with any questions you might have had regarding magic theory and whether it’s worth studying.

About the Author: Benji is a hobbyist magician from the UK who also runs a magic site over at thedailymagician.com