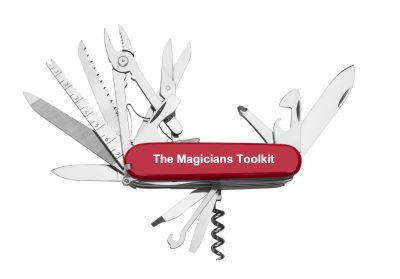 We’ve all been there.

You’re meeting someone for the first time, and they find out you’re a magician. What do they do?

Well, nine times out of ten, they say ‘show me a trick!’.

Great. The only problem is, you’ve left your favorite EXPENSIVE gimmick in a box at home. What now?

Today I’m going to try my best to provide you with three simple solutions to this common situation (none of which require you lugging that super expensive gimmick around with you!) Let’s get into it…

The best way to get out of this situation is to plan in advance. That DOESN’T mean rehearsing your full stage show every time you go out, but just to have something to lean on if you need to.

For most of us, a pack of cards is ideal.

For one, they’re comfortably familiar. Everyone knows what a pack of cards is; it gives the audience an immediate connection to you. Secondly, they’re adaptable. Whatever kind of persona you have, whatever style of magic you perform, there is a whole host of different tricks available to you.

Finally, and perhaps most importantly, they pack light. Wherever you’re going, you should have space on you for a deck of cards. Personally, I take a backpack to most places I go, and just chuck a deck in there with everything else!

As long as you have a pack of cards with you, you should have a few solid tricks that you can perform impromptu. For example, the Ambitious Card is usually the trick I use when people ask me to show them one.

So, the first step to solving this problem is to be prepared for it; carry cards with you!

Now, carrying a pack of playing cards will work for most people most of the time, but it isn’t a perfect situation. The fact of the matter is that you WILL get caught out sooner or later.

That’s why I advise you learn some magic with an object that will almost ALWAYS be present whatever the situation.

I love doing magic with people’s phones. It’s some of the easiest magic I know, yet it gets some of the best reactions. I think the reason for that is how personal it is.

With most magic, the props you use are foreign to your audience; they belong to you. There is inevitably a degree of detachment as a result.

However, when you do magic with their PHONE, you’re suddenly using an object that is deeply personal to them. You create this emotional attachment to the magic by using a prop they are very closely connected to.

Some of my personal favorite tricks to perform magic in any situation that use a spectator’s phone included:

Unlocking a spectator’s phone is almost like the ACAAN of mobile phone magic; magicians have been looking for the best way to do it for years. It’s a really powerful effect; especially since so many people guard their passcodes so seriously.

I personally use a technique taught by Greg Wilson, but there’s a great book by Michael Murray that teaches a whole bunch of really strong tricks with mobiles, including learning how to unlock TWO spectator’s phones at the same time. Check it out here.

Anyone who is familiar with the TOXIC force using a phone’s calculator will understand just how versatile this technique is.

I use the TOXIC force all the time. Here’s a routine that works really nicely for me…

You start out by setting up their phone with the TOXIC setup. You set the desired number to your phone number. This really only takes a second or two.

Then, you go through the trick the same as usual; you ask the spectator to input numbers, multiply them, input more numbers, etc. Eventually, once they’re happy there’s no way you could have predicted the outcome, they hit the equals sign.

At this point, your phone number pops up. They won’t register it as a phone number straight away, just a bunch of random numbers in a row. You hold your finger down on the numbers until the option to ‘copy’ pops up.

Now, you head over to their ‘phone’ app, and paste in the number, then ring it.

After a moment or two, YOUR phone starts ringing. You answer it and confirm that it is their phone calling you.

This works really well for me, and it’s a great way to get someone’s phone number in an original and fun way!

If you don’t know the TOXIC force, don’t worry. As it happens, there is an alternative method to this that doesn’t require the TOXIC force. You can check it out here!

Third Solution: Ask THEM To Show You a Trick.

This one won’t work in every scenario but I quite like using it now and again when someone asks me to show them a trick.

Instead of instantly diving into the first phase of my ACR, I instead ask them ‘Oh, you’re a fan of magic then? Could you show ME a trick?’.

As it happens, most people know at least one or two basic tricks that they can do with cards. You provide them with the cards and let them do their thing. After they’ve finished their trick, I go into mine.

Firstly, it gives me time to think! I can plan out my routine better and get a feel for their personality and what would impress them.

Secondly, it helps break any tension. All the pressure is taken off you; it becomes a shared experience rather than just you performing for them.

Finally, and this is just a nice little bonus, I find it tends to make them MORE impressed by my magic once they’ve had a go. This isn’t a case of showing off! It’s simply that they suddenly understand firsthand how difficult it can be, and so are more impressed as a result!

I hope some of these tips were useful to you! Let us know if you have any other go-to responses when someone asks you to show them a trick.

Is studying magic worth your time?

How magicians introduce themselves

Getting caught doing a magic trick

About the author: Benji is a hobbyist magician from the UK who also runs a magic site over at thedailymagician.com.