Sleight of hand is great.
But sometimes, it’s nice to have one or two tricks in our repertoire that don’t take ANY difficult moves. It’s even better when these easy tricks are some of the most powerful effects your spectator will ever see.

This is exactly what you can accomplish using gimmicked decks…

Now, there are a whole bunch of different gimmicked decks out there. That means that there are also, inevitably, a lot of BAD gimmicked decks. These are the trick decks that would never stand up to a real close up inspection, or perhaps have VERY limited angles. You want to avoid these!

So how do you know which trick decks are genuine quality? That’s what we’re going to explain in this blog post. You’ll find out three of our favorite tricks decks for beginners – and whether they’re right for you.

Let’s get into it… 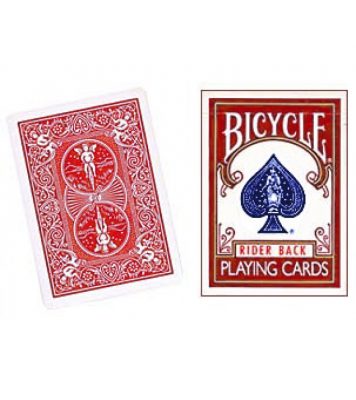 The One Way Force Deck is a regular deck of 52 cards. The cards are completely normal, and so is the deck.

All the cards are the same.

That’s right. Every one of the 52 cards in the deck are identical. For example, my One Way Force Deck is made up entirely of the Queen of Hearts. Now, I know what you’re thinking…

Isn’t this the oldest trick deck in the book? Nobody is going to be fooled by this.

Buying a One Way Force Deck might not sound like the best idea you’ve ever heard, but here’s why it actually is…

It’s all about HOW you use it. You need to be subtle with it. In my opinion, you shouldn’t use the One Way Force Deck as the ‘main’ effect. Instead, use it to support and strengthen other effects.

If the One Way Force Deck is the ‘main’ deck you use, people are more likely to want to examine it, or check it out. But if you only introduce it for a certain part of the trick, they’ll usually forget about it.

Imagine we were performing an ACAAN (Any Card At Any Number) routine. There are a few stages to this effect. First, the spectator selects a card. Then, they select a number. Their chosen card is then found at that number.

Let’s imagine you only have ONE deck to use for this. In most cases, you would need to force a card using sleight of hand. Now imagine you brought the One Way Force Deck into play instead. Here’s how you could present it…

You show the spectators an ordinary deck of cards and ask them to hold onto them – so you can’t do anything to them. Little do they know, the card you are going to force is already in the desired position.

Next, you introduce another deck (this one is the One Way Force Deck). Now, this makes sense. The spectator is holding on to the other deck – so of course you need to use another one! There’s nothing suspicious about it.

You spread the deck face down on the table and ask a spectator to touch the back of one card. This is a real free choice (not like it matters when all the cards are the same!). Once they’ve touched that card, you remove it from the deck and place it on the table. Now you gather up the rest of the One Way Force Deck and remove it from the effect.

It’s as simple as that. Now you can carry on with the effect as usual – forcing a number or using sleight of hand to manipulate where the number they choose lands. The key thing is that you’ve strengthened the ‘pick a card’ of the routine without raising any suspicions.

That’s how the One Way Force Deck should be used. Not as the main deck that does all the work, but as a support to the other aspects of your magic.

Here’s where to get hold of a one way deck

Let’s get into the next pick… 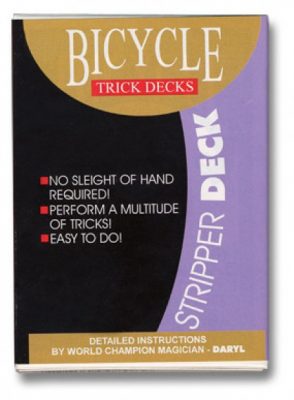 The Stripper Deck was the very first trick deck I ever received, and it definitely played a big part in getting me ‘hooked’ on magic.

It’s a very versatile trick deck that is almost invisible to spectators and can be used in hundreds (more like thousands) of different ways!

Without revealing too much, the Stripper Deck is for all intents and purposes a regular deck of cards, only you can alter each card in a certain way to make it immediately discoverable in the deck, even after shuffling. This process takes about a second to do and can be done right in front of the spectator’s eyes.

Once you’ve mastered this move (and it really is very easy), a whole new world of card tricks will be opened up to you.

One of my favorite uses of the Stripper Deck is as a ‘safety’ net.

What I mean by this is that I perform my card magic as usual, but using a Stripper Deck to give me an ‘out’ if I need one. So if I’m doing the Ambitious Card Routine, and I realise I messed up – I can very quickly and easily find the chosen card if I’ve been using the Stripper Deck function (and nobody will realise that I messed up!).

The Stripper Deck can be operated through ‘feel’ alone so it also opens up a whole range of possibilities – you could perform with your eyes closed, with your hands behind your back, or even with a blindfold on!

I would definitely recommend checking out The Stripper Deck 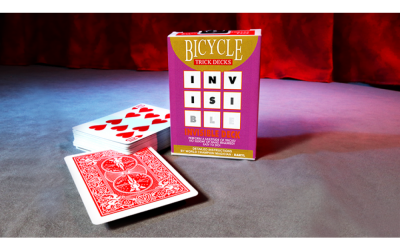 No.1: The Invisible Deck

The magician places a deck of cards on the table, and promises that he isn’t going to touch them one. He then invites a spectator to think of ONE card. They really can think of absolutely any card in the deck – it is a completely free choice.

Once they’ve they’ve decided on their card, the magician asks them to say it aloud for the first time. Let’s say it’s the King of Spades.

The magician slowly reaches to the table and opens up the deck of cards that has been there the WHOLE time. He carefully spreads through the cards to reveal that they’re all face up…apart from one. The one face-down card is removed from the deck, and the magician lies it flat on the table. He reminds the audience that they really could have thought of ANY card. He turns it over to reveal that it is somehow, impossibly, the same card that the spectator named!

This is an absolute game-changing effect for any magician. It’s a great opener card tricks, and just as competent as a closer to your performance. And better yet, it’s one of the easiest effects you’ll ever perform.

Check out The Invisible Deck

I hope you enjoyed this list of the top three trick decks for beginners! All of these decks are great investments for your magic.

About the author: Benji is a hobbyist magician from the UK who also runs a magic site over at thedailymagician.com

How to Learn the classic Force like a Pro

3 Card tricks Every Magician Should Own