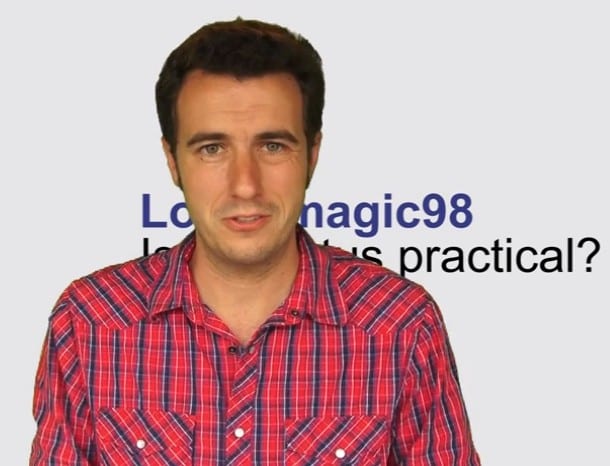 The Merchant of Magic love the team at Magic Geek. It's one of our favourite magic shops in the USA. Chris Ballinger filmed this video to answer questions about the Deceptus trick. The team at Magic Geek have also produced a bonus video specially for customers based the US who want to use Deceptus with US soda cans.

If you are based in the United States and want to order Deceptus from a US magic dealer, we recommend you pick it up from the Magic Geek team.

US Deceptus by Jimmy Strange 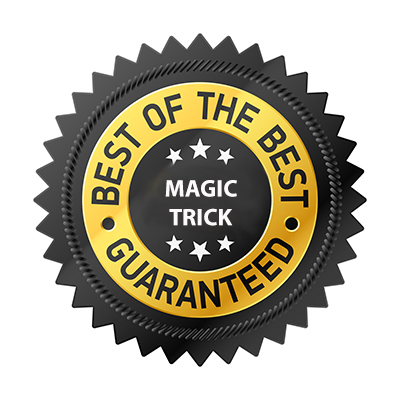 Brian askes : 'Can you recommend the best magic trick ever? An all action, singing, in your face, amazing, miracle looking visual trick that will leave people talking for years. Basically a credibility clincher.'

"Good Morning," said Deep Thought at last.
"Er..good morning, O Deep Thought" said Loonquawl nervously, "do you have…er, that is…"
"An Answer for you?" interrupted Deep Thought majestically. "Yes, I have."
The two men shivered with expectancy. Their waiting had not been in vain.
"There really is one?" breathed Phouchg.
"There really is one," confirmed Deep Thought.
"To Everything? To the great Question of Life, the Universe and everything?"
"Yes."
Both of the men had been trained for this moment, their lives had been a preparation for it, they had been selected at birth as those who would witness the answer, but even so they found themselves gasping and squirming like excited children.
"And you're ready to give it to us?" urged Loonsuawl.
"I am."
"Now?"
"Now," said Deep Thought.
They both licked their dry lips.
"Though I don't think," added Deep Thought. "that you're going to like it."

Quote from: The Hitchhikers guide to the galaxy

The ultimate question for a magic shop

I'm often asked to name the best magic trick ever. So… I'm finally going to name it. Ready..

It's that magic trick you bought from your favourite magic shop a while back.

You know the one that I'm talking about. You were so blown away by the magic demo. It looked absolutely perfect. The trick was solid, it looked within your skill range, and the reactions people gave to it were just what you were looking for.


Once you ordered it, you couldn't wait for it to arrive. The anticipation was almost as much fun as the magic itself. When that jiffy bag came through your letter-box, your world stood still. This time it was different. The missing bit of the magic that would solve everything. You began to learn how to perform it..

The best magic trick ever is now forgotten. You're busy waiting for the next magic trick to arrive. The new 'best ever magic trick' that will complete you as a magician.

That magic trick is still waiting for you. It's just as amazing as it was when you first discovered it. The problem is that it didn't arrive complete. It was missing the parts YOU had to supply:

There really isn't a 'best ever magic trick' there is only practice, rehearsal and finally mastery. Any magic trick can be a work of art and make your reputation. That magic trick is still waiting for you to go back to it and get everything it originally promised you..

Best wishes as always and good luck with your magic 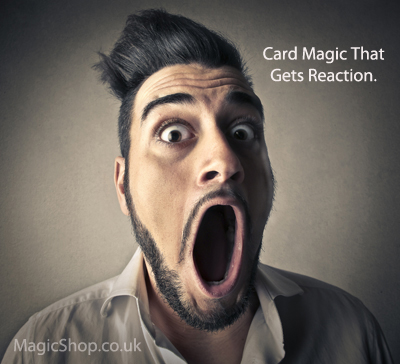 Dave writes: 'Could you recommend some awesome card magic tricks to buy that like gets insane reactions?'

That's a hard question for us to answer, as the team at the Merchant of Magic don't just want to sell you the latest hot card magic tricks, or push you towards their own brand magic trick releases. We are more interested in finding material that is specifically right for YOU.

We will suggest a few for you. However, there isn't really a set of card magic tricks that are guaranteed to always get insane reactions. Most of the time it is all about performance, rather than which specific tricks you are actually doing. A strong trick performed weakly will get much less of a reaction to a weak trick performed well.

Having said that, here's a little run down for you to check out, We will suggest the best types of card trick and then suggestions for great products that fit these suggestions. Let us warn you though – one mans meat is another poison. There isn't a way that we can wave a wand and give you an award winning magic act. We can however, let you know the most popular magic tricks that other magicians are recommending from their experiences.

Arguably one of the strongest card tricks you can perform.

The Cards on Ceiling is an iconic piece of magic, many venues that have magicians working in them often have playing cards stuck to the ceiling and they become great talking pieces. It is a constant reminder that magic has happened in that area at some point in the past. It always draws attention and curiosity from laymen. Here are some related products to the Card on Ceiling:

Torn and restored cards have fascinated audiences for hundreds of years, some are very basic, some much more elaborate. It really depends on how much sleight of hand you wish to incorporate into performing this effect. We will list some of the most popular versions and a few words about them to help you understand them each.

Torn by Daniel Garcia – A pure sleight of hand piece by piece restoration of a signed playing card. Very little prep work needed, just pure skill.
Rewind by Michael Chatelin – A gaffed version, gaff does all the work for you. Not signed and card must go back to the deck before you hand it out for examination. Very easy, but less convincers such as signature and slow and fair ripping sequence the ripping sequence must be fast.
Star by David Forrest – A great visual piece by piece TnR. Will take work to make it perfect as it is sleight based rather than gaff based, this is my favorite after Torn by Daniel Garcia
RE by Chris Webb – A Gaff version that does most of the work for you. Designed to make the piece by piece TnR as easy as it can be which turns out to be pretty easy!
Slide by De'Mon and Titanas – A gaff version that allows a very easy TnR which also incorporates an animation, highly recommended.

This is where a spectator's selection mysteriously emerges from a deck without any contact being made with the deck.
Chill – A great version where you have the card in the spectator's hand as they cut themselves. As soon as the card comes out of the deck everything is examinable.
Haunted 2.0 – Arguably the best version of the haunted deck available. A gaffed card does all the work for you, you don't need any contact with the deck, the deck can be isolated under a glass bowl if you wish.
Static – The cards cut themselves whilst the spectator has their finger on the deck. The card shoots out of the deck also as the spectator taps the deck.
Loops – Loops can be used for the haunted deck, this is the version Dynamo Magician Impossible uses.

These are all effects where you prove you have correctly predicted ahead of time what card a spectator would think of or choose.
Invisible Deck
Inferno – Joshua Jay
Strange Travelers – David Blaine
Sub Zero – Wayne Dobson

We hope these suggestions help you. Every one is solid useable material that has been proved to be high quality by hundreds of performers using them around the world. Pick a few that fit your style, but also remember to look back on the magic tricks you already own. The great reactions don't automatically come with a new magic purchase. They come through practice and presentation. The magic tricks that will get you the best insane reactions might just be the ones you already own but haven't perfected yet.