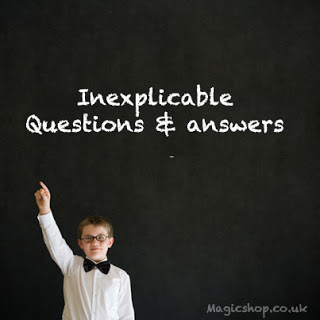 QUESTIONS AND ANSWERS ABOUT

INEXPLICABLE BY STEVE SHUFTON
We are getting a lot of questions being sent in from magicians that are excited about the release of the no sleight of hand card trick: ‘Inexplicable‘. Here are some of the most common questions asked. If you have a question that hasn’t been mentioned, just ask it in the comments section below, and we will try to answer it for you, either in the comments section or we will build it into this blog post as we update it.

Is removing sleight of hand from professional card magic a form of ‘dumbing down’?

We don’t think so. Technical ability with playing cards has very little to do with being a good magician. In the same way that being able to read sheet music doesn’t make you a fabulous musician. Reducing the need for sleight of hand brings this magic trick into the reach of magicians who may be amazing entertainers, but have no time or inclination to focus on mechanics.

Are you trying to pitch a magic trick for professionals to hobbyists instead?

Steve Shufton has a truly good take on this. He teaches that often the most experienced magicians ARE the hobbyists!

Professional magicians do a few tricks very well, over and over again. It’s not uncommon for a working magician to use the same magic tricks over his or her entire career. In contrast, an amateur magician has a limited audience. Hobbyists perform for their family and friends, so have a constant drive to learn new material.  Over time,  it’s likely that they will know much more technique than a professional magician who focuses on his core acts. Some of the most famous magicians in the world were amateurs: (Steve gives examples of Dr. Daley, Ramsey to name a few).

Inexplicable doesn’t need sleight of hand and is suitable for complete beginners, but that’s not to say it’s automatic. Every magic trick needs practice. Good magic is about the presentation and the style of the performer. Like many magic tricks, you could open the trick, read the instructions and start performing it right away, but that would be selling yourself and the magic trick short.

If you love magic like we do, here at The Merchant of Magic, take the time to rehearse and master Inexplicable, even though it is simple to do.

Can the deck of cards be used in other tricks before performing ‘Inexplicable’.

Wow, that last question was a long one, so lets keep this one short and sweet: Yes you can! No need for deck switches etc.

Steve makes these himself and has handpicked the magic shops in each country that he feels would be best to supply Inexplicable. Because this card magic trick is extremely close to Steve’s heart, it’s important that magicians that use it get only the best support and customer service. As a by-product of this, there  are super low distribution costs getting ‘Inexplicable’ to you. No middle men taking a cut and shipping is low as only a few dealers are ordering in VERY large quantities.

Steve Shufton has given a huge amount of time and skill into a relatively low price card trick. In a sense, he hasn’t built the time it took to invent the trick, the hours of performing and tweaking the trick, or the magic secret. Steve often talks about the old days of magic. He remembers only Magic SECRETS changing hands for hundreds of pounds. If he had taken our advice, we would have sold this to few magicians and charged a LOT more for it, but that’s his call to make, and your gain.

Miracle Premonition is another magic trick created by Steve Shufton. The concept of the ‘open prediction is the same’ but Miracle Premonition is much more expensive. The price reflects the huge quantity of work and time to manufacture the props. Although are quite a few differences in the performance conditions, presentations, methods, it isn’t wise to do them together. Inexplicable has a much more direct and uncomplicated plot, which suits many more close- up, street, or walk-around magicians. Both Miracle Premonition and Inexplicable will create a similar effect for the audience, but the difference in price makes, Inexplicable a clear winner in our opinion.

Is ‘Inexplicable’ mass produced or made directly by Steve Shufton?

Steve makes his items himself. He wouldn’t have it any other way as it allows the quality of each item to be carefully controlled. With Inexplicable, you are getting something that Steve Shufton has personally followed through the stages of creation. It’s one of the reasons that his magic tricks have such a great reputation with professional magicians.

Can ‘Inexplicable’ be repeated?

Yep. You can do it several times at each gig or venue you attend. As with every magic trick, it’s not wise to repeat a magic trick to the same group twice: ‘Once a trick, twice a lesson’.