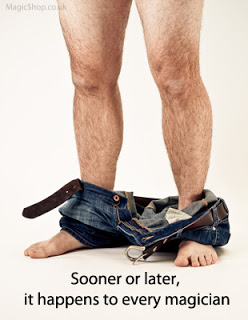 It doesn’t matter how much you practice, how hard you routine your magic tricks, or how often you perform, sooner or later you will drop some playing cards, fumble with a prop, or knock something over.

Dominic Reyes recorded this short video about how to deal with situations just like this:

The secret is simple: Don’t stop and draw attention to it.

Spectators take cues from you about how to react and behave. If you communicate that it’s no big deal, that’s how it will be perceived.

Just acknowledge that it has happened, show that it’s no big deal, with a smile, and carry on with your trick. If you really do have to stop and pick up an item you have dropped, make sure you don’t stop ‘the action’. Ask the spectators a question, tell a short anecdote, anything to stop the moment becoming ‘dead time’.

How to deal with magic tricks going wrong.

How to use a ‘Magicians Out’.

Help! – My magic secrets been exposed.

How to reduce your nerves when performing magic tricks.