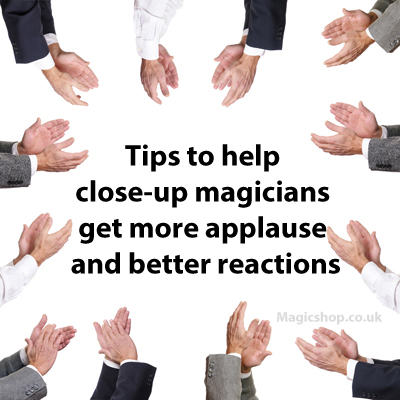 Tips for Magicians – Getting Better Applause

As far back as ancient Rome, performers have requested applause from their audience by shouting “Plaudite!” it shows very clearly that performers have always sought approval from audiences. For a close-up magician, wanting more applause isn't just an ego (although a little pride and acknowledgment of a job well done isn't a bad thing), applause is also of great benefit as a form of 'social proof' to other spectators that something good is coming their way. It's the traditional version of the Facebook 'like', spreading the message that the magician is worth watching.


The problem with close up magic

Close up magicians perform for small groups, often in an informal situation. The group of spectators is often surrounded by other groups of people not participating in the magic show. This can inhibit or tone down the level of applause that spectators feel comfortable giving. In a formal show, people understand that applause is expected, if they have enjoyed the show, but in a close up setting hey may not understand the same rules apply. How can a close up magician adjust for that, communicate what's expected, and softy draw spectators to act as they would if they were in a larger audience? Here's 4 tips to help you get more applause and better reactions at the end of your close-up show.

Make sure that the final trick you perform ends on a very strong climax. The energy should build up and finish with a 'bang'. I don't mean you need to shoot fireballs out of your sleeves, but rather that suspense takes place as a series of events conclude with a surprising magical ending. You are looking for the last trick you perform for the group to have a thrilling climax rather than presenting them with a puzzle or mystery to 'mull over'. There's nothing wrong with strange mysteries or leaving something 'hanging', but if you are seeking to end on a strong round of applause, then go for as much energy in the final moment as possible.

2) Don't to a Dynamo Magician Impossible

The trend at the moment is to walk off, right at the end of the magic tricks climax. You see it often on TV. However, the camera remains with the spectators, so in reality, the performance doesn't end when the magician walks off. If you do it in real life, you end at THAT moment and it's a killer for applause. Wait a while. Take a bow. Only leave once the applause starts to slow down.

Bow with your hands sleightly raised from your body. Don't make a big thing of it, but if your hands are a little outstretched to the sides as you bow, it's a subtle cue to applause. However, resist at all costs, the urge to clap yourself 🙂

If one or two people start to clap, make eye contact right away with a big smile and say "Thank you". That will help get everyone joining in.

Do This: Try taking a bow at the end of your last trick. Do it with a big smile. Don't feel embarrassed, it' what you are supposed to do as a performer. Although it seems the norm for close-up magicians, people still find it odd that many magicians just walk off after showing a trick. It's fine to signal the end of your show with a bow and take applause.