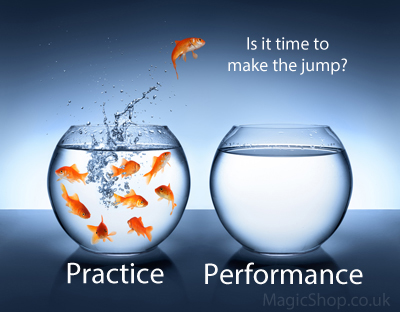 'I've been into magic for a while now, and when I was young I could perform magic to people without worrying if I were going to mess up the trick. I'm 21 now and for some reason I feel the need to practice the trick to perfection before I can perform it to anyone, even family. Is this a good or bad thing?'

Here is what Ben Williams said in reply, hopefully if you have the same issues this advice will help you out too!

When we mature our brains develop much more of a realisation of consequence. When you were younger, you probably didn't think about any consequence of performing a magic trick due partially to this fact. It is not a bad thing to practice an effect to perfection before performing it. The problem would be if you are not performing the trick because of fear it is not good enough, not that you don't know it inside out. When going to perform we all have fears at the last minute, such as the trick you feel like doing is just not going to fly or get the reactions you imagine. The real truth is that you just don't know how your magic is going to go down and in all reality it most likely is going to get a much better reaction than you imagine.

I truly think that practice is not a bad thing at all, but you should be able to realise when you have practiced something enough. Take a punt on performing it, this is where your skills will become honed.

You can practice a move in front of a mirror until it looks invisible, but if you go to pieces in front of someone when performing then no amount of practice at home will get you past that. My advice would be to practice some easy tricks that you can do without a hitch. Even if they are self-working, get two of those tricks, one to begin a set with, and one to end it. Sandwich those magic tricks around a new trick that you want to perform, but haven't road tested yet. This way, if it goes wrong, it doesn't matter.

It's not the end of the world

There is nothing wrong with a trick not working; it is only your ego that is harmed. If you can brush that off, then there is nothing left to worry about. If a mistake doesn't matter to you then how can a spectator be bothered by it or harass you? Sure, you may feel for a moment like you have egg on your face; or that you have not done yourself justice. However, if you let those feelings pass and look at it from a different perspective, that of it being a positive experience to learn from then you will only get better and better. Learn from your mistakes, remember a mistake is only a mistake if you refuse to learn from it, if you learn a valuable lesson then how can it be anything other than a positive experience?

A friend of mine, Justin Flom said he will ALWAYS offer magic up to his friends and people he meets, he always has something prepared and will always try new things on his friends. True friends would not care if anything went wrong, they may laugh at you for a moment but if they are real friends it won't change anything, just laugh with them. It is true; it can feel horrible if you are trying to make an impact with your magic and then it goes wrong. If the secret is revealed or just does not work at all, the illusion you are trying to create falls to the floor like a backdrop curtain revealing all that is behind it. But in truth nothing is that bad, yeah an effect won't have worked, an illusion is destroyed but did anyone get hurt? Was anything illegal done? Did anyone lose their life savings? No! So in the grand scheme of things nothing has happened. Just brush yourself off and forget how it made you feel and make sure you get to the bottom of why it went wrong. Then work on the issue so that you do not make a mistake by repeating it.

Think like Dr. Pepper, what is the worst that could happen? Take a deep breath, clear your mind of any negative thought. Just rock up with an opening line that gets the ball rolling so you cannot simply back out, and you will have a great time. I used to turn up at gigs worried sick that it would be terrible and after every gig I would leave and feel amazing as it was never as bad as I had imagined!