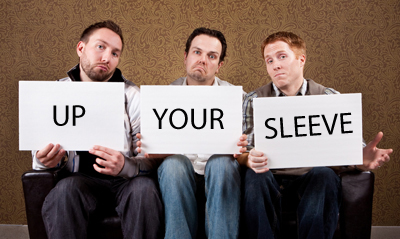 A spectator guessing possible solutions, can be just as bad as spotting the true secrets of magic tricks. How can magicians defend themselves against this?

I have a good friend who is totally obsessed with zombie movies. He must have watched them all. Zombie films are almost as much of an obsession for him as magic is for me. Watching these old zombie flicks with him has taught me two things:

2) Some of these films are truly terrible.

The weak story I can forgive. After all, there's only so much plot you can build in. The low budget is fine. What gets me is the sloppy lack of attention to detail. Sometimes a sound boom pops into view. Every now and then you see a reflection in a window of the camera crew.. Little details that shouldn't be there. That's also a valuable point in the performance of close up magic:

If your audience becomes distracted by something that shouldn't be there, they lose part of the experience.

When you perform your sleight of hand, it goes without saying that you should have learned to perform the moves to a point where they are automatic, natural and flawless. You should work on your technique until there is very little chance of a something 'flashing' or 'talking' during its execution. A messed up move can pull your spectators out of the 'magical experience' in the blink of an eye. Switching their attention from the theatre of the routine, to an appraisal of your abilities. But what about 'tells' and flashes that don't even exist…

When a move that never happened goes wrong

It's quite possible for an audience member to detect a move, even though it never happened. Even if your technique is flawless, an audience member may think of an explanation for a trick even though it isn't the actual method you used. To the spectator, it doesn't really matter. If the trick COULD be done like that, in their minds, they got it right. Once any explanation is present, the magic is lost.

ANY explanation is the right answer to a spectator viewing your magic as a puzzle. Magic needs to be impossible, so it's your job as a magician to make sure you remove the possibility of methods even when they are not present.

Spectators are not chained to technique

Unlike a magician, a spectator is free from the restraints of technique. You may know that it's not possible for the coin to be up your sleeve, because it would be in the wrong place for its production later in the routine. You understand that even if you were to be able to peek at the playing card before it went into the deck, that would not help you, because it changes colour once it's revealed.. You understand what's possible within the context and structure of the trick. Your spectators are free from any of those cares. They don't know any of the secrets of magic tricks. If they find ANY explanation, they have solved the 'puzzle' and that's good enough for them. They don't care about the fine details in the same way.

How do we fight this?

Look through the tricks that you perform. Try to shed all your magical knowledge and see them as a spectator does. How COULD the trick be done, if you could do anything within the laws of Physics?

Could the card be swapped?

If the other hand had the coin, would that be an answer?

Is it possible that the choice wasn't totally fair?

Taking time to come up with an alternative, unlikely, and even apparently silly 'solutions' for the magic tricks you perform is valuable. Once you collect all the 'wrong answers' you can make sure your presentation guides your audience to dismiss them without even giving them attention.

Work on dispelling possible solutions to your tricks, by identifying them. It's easy to be blind to them because you are so wrapped up in the mechanics of what's really required to make the trick work.

Try to think from the perspective of your spectators. Ask yourself what they would be thinking during each moment of the routine.

If you can, show your magic to some young kids. They will be brutally honest, and surprisingly imaginative. The tricks may go over their heads or fail to hold their attention, but they will probably have quite a few possible solutions you never thought about.

Once you identify all the possible solutions, you can adapt the structure of the trick, and the presentation of the effect, so that you clearly cut off each 'solution' as impossible.

Expose your own magic

You may even draw attention to a few common 'solutions' and point out to the spectators how they would be impossible. It's fine to take a moment during a trick, to recap on the fairness of the conditions, the impossibility of what is about to happen, and to dispell any solutions that the audience may have. You may find this an interesting presentation in and of itself.