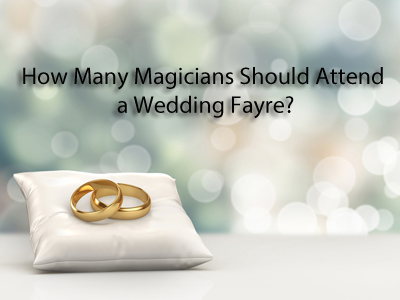 Should magicians make sure they are the only performer at a wedding fayre?


A funny thing happened to me at a wedding fayre I attended recently. I was booked as the only magician to attend, but when I arrived, I found that I had been placed right next to another company that also had a magician on the stand. I wasn't very impressed..

Now, I've no problem performing at a large wedding fayre that has more than one magician as I'm confident in selling my unique features and my price range tends to be a lot higher, so it's very much a different product.. But, I would normally know that in advance and would have made sure that the venue and footfall was large enough to cope with several magicians. Here's how I handled the situation:

I recommend that magicians performing at wedding fayres only choose events that have one magician attending. Magic is a small catagory and it's easy to 'over kill' that catagory within a show. However, large wedding fayres that have several rooms or floors can usually cope with more than one magician, providing they have a different style and service proposition.

If you find yourself working with another magician in a wedding exhibition it's important that you are polite and friendly. Chat with the magician and arrange to perform different tricks. Check fee's to make sure you are both on the same page. Try to position your stand away fromthe other performer, ideally in a spot there the flow of traffic goes in another direction. That way, you get half the new traffic and the other performer has their own half.

If you find that a stand has added a magician without the organisers permission, it's fine to talk to the organiser and ask that the other organiser is asked not to feature the magician. If you have agreed to be the only magician attending, then that's what should take place. Remember to be polite and friendly when you sort the issue out.