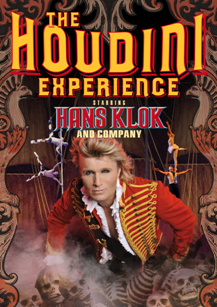 IN A TRIBUTE TO HOUDINI, HANS KLOK BRINGS HIS UNIQUE TYPE OF THEATRE TO THE WEST END!
The greatest illusion show on earth
Starring HANS KLOK
The fastest magician in the world in
THE HOUDINI EXPERIENCE

With more illusions than you can count!

For the first time ever, Hans Klok the Master of Mystery arrives at the Peacock Theatre, London for 5 weeks only. Described as a ‘chilling, thrilling and breathtakingly amazing show’, Hans Klok, his Divas of Magic and a company of world-class variety and circus acts perform illusions, daredevil stunts and wizardry unlike anything ever seen before.
Having starred in Las Vegas with Pamela Anderson as his magical assistant, Hans brings a new kind of theatre to London, one for all the family to enjoy this Spring.
Escape from reality and get ready to relive the Houdini experience.
‘The greatest wizard in the world’
www.sadlerswells.com
www.facebook.com/houdiniexperience
HOW TO ENTER THE COMPETITION
To be in with a chance of winning 2 tickets to see this fabulous show simply visit the Merchant of Magic Facebook page and comment on The Houdini Experience feature. A winner will be picked at random on 11th February.

Terms and Conditions:  Prize valid for Tuesday – Thursday performances from 23 February – 2 March 2012, subject to availability. There is no cash alternative to the prizes, they are non-refundable and non-transferable and not for resale.