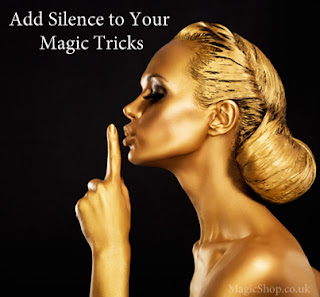 How magicians use silence, can be just as important as the words they say, when performing magic tricks. Let's look at how you can say less when you perform, but actually communicate more.

One of the best ways to improve your magic tricks is to develop an entertaining presentation and script. Magicians who want to be more than just average, need to progress their performance patter further than:


A good script for a magic trick engages interest, focuses attention, misdirects and entertains. The script is made of sentences, carefully places in just the right order. However,  a script isn't just about the sentences, it's about the gaps between them too. There are three main types of silence between lines in a magicians patter:

A beat is a small silent moment, often for just the count of one, or for just a second. It's a little hesitation before the next line, or the next action is started.  Thinking about the 'beats' in your script can stop you constantly 'run the lines' and talking too fast. It helps create tempo-rhythm in your magic. For magicians, 'beats' create a moment for the magical event to occur. The magician lifts the cup to show the ball has returned under it. There is a 'beat' before his hand and cup move away.

Unlike a beat, the 'pause' is full of action. The magician pauses and in doing so, he or she communicates to the audience. Perhaps the magician stops and takes a breath. In pausing like this, the magician emphasizes what preceded the pause or even something that is about to follow.

In a sense, the word "pause" is incorrect  because each moment of the pause is full — even when the magician is not saying anything, the pause is talking on behalf of the magician. The goal of a pause is to give something that is more powerful than a beat, or words could convey.

The start, length, and finish of silence matters.

How a magician starts a pause, its length and how it ends are also very important. When added to the script of a magic trick, attention to just one part of a pause without thought for the other two parts can ruin the power of the pause. A pause shouldn't get in the way of the action and dynamics of a magic trick. Within a scripted magic trick, it is much the same as musical notation in music.

Why magicians use silence in their magic tricks.

Using the pause device can have a dramatic affect on your magic. There are many ways to use a pause including:


DO THIS: Experiment with adding both pauses, and beats into the delivery of your magic tricks patter. Use your rehearsal time to explore how this changes the trick.


Record yourself performing some magic tricks whilst using different beats and pauses. See how that transforms the whole feel and pace of the magic tricks. Notice that every moment of a presentation matters. The pauses and silent moments are just as powerful as the lines you use.