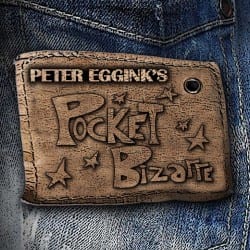 With any magic trick release as hot as Pocket Bizarre by Peter Eggink, there is always a list of questions that follow.

There seem to be a few questions that are definitely the most frequently asked by magicians; so we thought we would list them all here with the answers and add a couple of great tips for you too!

Pocket Bizarre takes the playing card to pocket plot to new heights and makes the magic happen automatically. A card is selected by the spectator and lost back in the deck of playing cards. You then turn around to show your back pocket; there is nothing to see. You turn to face your spectators and without your hands going anywhere near your back pocket and with no funny moves you turn back around to show that there is now a card sticking out of your back pocket. The spectator removes it, and it is their chosen card!

Questions and Answers about Pocket Bizarre

Can this be done with a signed playing card?

Yes, it can be done with a signed card! The DVD covers this handling as well as many other ideas.

Can the spectator remove the playing card?

It is perfectly fine for the spectator to remove the card from your pocket with most of all the handlings. However, there are a couple of versions taught where this is not possible.

Is it difficult to transfer the gimmick from one pair of trousers to another?

Yes! It is so simple to transfer the gimmick from one pair of trousers to another it is almost criminal!

No! The Pocket Bizarre gimmick is absolutely silent!

Can I get the spectator’s signed card to appear without awkward palming?

There are a couple of handlings taught for the signed card version. There is a version where the signed card is able to be removed by the spectator that requires no awkward palming, just great routining.

If a spectator were to remove the card themselves would they feel the gimmick in your pocket?

No! The gimmick is specially manufactured to clip perfectly inside a standard billfold wallet so all a spectator would feel is a wallet in your back pocket that is if you let them feel around that much! Please note though, it is not necessary for you to use the wallet.

Here are a few great tips that can help you get the most out of your Pocket Bizarre as it is so much more than just a card to pocket trick!

This is a great tip that has been suggested by many people:

Jeff Prace has a great idea:

Give the spectators a small stack of four or five bills. Have them hold the bills tightly between their hands, and explain how you can “pickpocket” one of the bills. Show your back pocket empty, and with your hands clearly empty and visible the whole time, turn back around to reveal a bill. They open their hands and now have one less bill.

‘For a really nice un-gimmicked bill vanish from the spectator’s hands then check out the Revised Las Vegas Leaper in True Astonishments.’