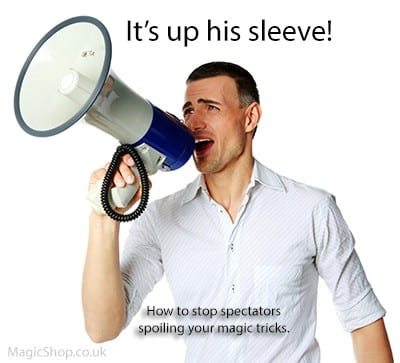 What should a magician do if someone in the audience knows the magic trick and explains the secret?

This happened to a magician recently and they asked the Merchant of Magic team for some advice.

Magicians all have their own way of dealing with this situation, but the key is to be polite and not take it as a challenge. Ask yourself why this is happening. Is this because you have all the attention and the heckler wants to take control of the group? Could it be someone who loves magic and just can't help himself? Perhaps it's both of these, or maybe it's because you have projected something into your presentation that has sold the situation as a puzzle that is open to solutions being suggested. Double check your presentation and approach to that group and make sure you have not prompted this responce in some way by mistake. Chances are, you did everything right and the person just wanted attention, but prompting 'solutions' could be the problem if you find this happening often.

The most important reaction is that you don't lose your cool. Stay polite, calm and unflustered by the situation. A heckler rarely reflects badly on the performer, and is usually not popular with the rest of the audience. They don't want to have the magic spolit for them, and the heckler will usually not receive much reinforcment from the group to continue UNLESS you react like a jerk and lose their support.

I asked the magicians on the Merchant of Magic Facebook page and here's some of the best answers:

Tony Rixon I have used the rouse of telling them, they are close and I invite them to take a closer look but use a different method to create the same effect.

Martin Jones Ah, very good sir! Do you know how the ambitious card trick goes? Yes? Excellent, you crack on then (handing them the cards). Alternatively keep them onside by saying that's how you used to do it and wink at them. They're the Alpha Male and you are a threat. You need to put them down or have them as an allie to avoid them doing it again and again. Hand them a deck and say show us your flashiest trick!

Greg Craddock "Oh is that how you did it? Interesting, i use a different technique. Now heres one i learnt in outer Mongolia…"

Toast Slumberer I witnessed this happen one time during a children's magic show. As the magician Trevor Price was doing one of his tricks a lady sat in the back saying how she'd seen the trick before and spoiled the surprise ending of the trick. and so said he "This is a show for the kids" then to the children he said "That ladies trying to ruin the magic show for you, do you want that?" and all the kids screamed "NO!" and booed even the lady. the rest of the audience found this really funny. needless to say she was very embarrassed stayed quiet during the remainder of the show. Nobody else dared try. He managed to save the show without looking like a bad guy. Excellent crowd control.

Joshua Bartley Make a joke and say "I've payed you to be a stooge, not reveal the trick!" And laugh and then say "all jokes aside, very interesting method mine is much simpler thank god!"…. You could end it right there or go down the "are you a magician too?" Route…. "Would you kindly go on stage and show the audience your favourite trick and I'll sit in your seat? (in a sincere tone without sounding too cocky) "I love watching magic as well as performing too!" The possibilities are endless always be prepared for the unexpected, there's always one….

Frank Quiroz Announce that there is another magician in the audience and they will be up to perform next.

Adam James Reeves I get this a lot working the clubs I usually say something along the lines of "oh we went to different schools together" or "oh you're a magician also, thank god for that I thought I was the only one here!" Anything to divert attention back to he/she.

Alex Sladzevsky I think if you are good at audience management and people are enjoying the show this shouldn't happen. If it does I would interrupt him before he would spoil anything and let him know that he is spoiling it for everybody else, not for me. Cause for me nothing really changes, but for the spectators the effect is ruined, so if you are doing it right the spectators will shut him up, not you.

Bilal Abidi I just say 'yes that's how I do it 'very sarcastically and then everybody laughs and doesn't believe the spoiler.

Will Jones I had this happen to me yesterday actually, but it was a casual amongst a couple of friends thing and I was well and truly caught off guard and rumbled. Didn't mind too much because it was just a bit of fun, but if it happens in a performance setting I normally give a wink and a quiet "Alright mate don't spoil it for everyone else, I'll chat to you later" sort of thing Regardless of whether what they've said is right or wrong. What I usually do then is proceed to tell the audience that I'm going to perform a trick, teach them how it's done, and fool them with it again. The second time I perform however, the method is changed slightly and the ending is different. I've found that normally gets anyone that's not already onside, onside.