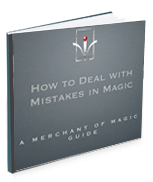 Have your magic tricks gone wrong?

It doesn’t matter how much you practice your magic tricks, sometimes the unexpected happens and everything goes wrong.• At that moment, how you deal with the situation is the most important factor. It’s easy just to throw your hands up in the air and let everything fall apart. However, with a little preparation beforehand you can make sure you are prepared to turn this situation around.

The instruction guides for magic tricks tends not to spend any time dealing with mistakes that can happen. There is little information for new magicians covering how to best handle mistakes and slipups during performance. These skills tend to be developed through live performance and the school of hard knocks. It doesn’t have to be this way.

Ben Williams has written a book explaining how magicians can deal with situations like this. Here’s some more information: