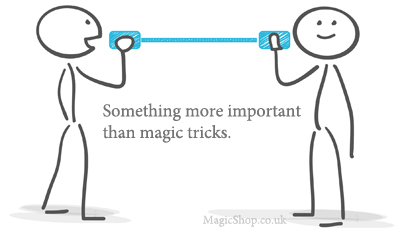 There's a skill that magicians should master that can be more important than their magic tricks.

As magicians, we all want to find the perfect magic tricks that will impress our spectators, but is that all there is to it? Does our success as a performer depend on the magic tricks we perform?

Dominic Reyes took a bit of time out at a gig, to record this video on the subject:

Why people book YOU as their magician

1) They have found out about you from advertising.

2) They have heard about you from other people.

The first source depends on your marketing skills and the amount of effort/money you are prepared to invest in promotion. It has very little to do with your skills as a magician or the quality of the services you will actually offer. Anyone can pitch themselves as a brilliant entertainer and 'sell their services'. The second source (what people think about you) is far more important for your long term career in magic, because it brings in many times more work. If you give great service and people spread the word about you, you get new gigs through their advertising, but you also get REPEAT BOOKINGS.

You can't advertise your way out of bad past experiences.

It doesn't matter how great your website is, or how big your advertising spend can be, if you didn't impress a client when they hired you, they won't book you again. If you didn't stand out amongst the other entertainers, they have used in the past, you won't be their instant choice of the magician to hire.

So how do you make sure you stand out in the minds of your clients? I'll let you into a secret:

IT'S NOT THE MAGIC TRICKS YOU PERFORM

Most working magicians tend to do very similar tricks. They all have their own presentations and styles, but on the whole there is often little to tell one magician from another with the average material being performed nightly by close up workers. Tricks come into fashion and become the 'latest craze'. Classic magic tricks continue to be used because they are, well, classics. So what's the difference that sets one magician apart from the others and makes some a success, whilst others continue to plod along? I think the secret extra 'something' is this:

HOW THE MAGICIAN MAKES PEOPLE FEEL

It's not the magic tricks that take a magician above the average, it's the performer's personality. It's how they talk to the spectators, how they communicate. Most importantly, it's about making spectators feel good about themselves and performer. When a skilled magician leaves the event, the people are sad to see him or her leave. They then look forward to seeing the magician again, because they felt good when he or she was there.

Some people are naturally great at talking to people, whilst others find it a challenge or even a complete mystery. Are you a likeable, social person? You need to ask yourself that, even if it's uncomfortable to do so. If you think you are not very good at this sort of thing, not all is lost. It's a skill that some people have, naturally, but it's also a skill that can be learned over time.

The first step is to stop and actually look at how you come across. Should you spend a little less time learning moves and magic tricks, and instead work on your character and conversation skills?

If you want to develop in this area, invest in a few good books on communication. There's loads of them out there, mainly aimed at sales and business.

The traditional classic is: How to Win Friends and Influence People by Dale Carnegie. It's a bit dated now, but the lessons it will give you are timeless. A modern book that will give you a LOAD of practical advice to put into practice is: How to Talk to Anyone by Leil Lowndes