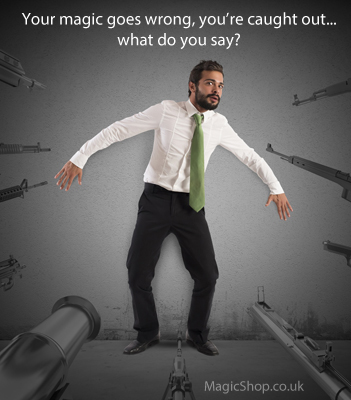 Sooner or later, someone will catch me out performing a magic trick. They will look were I don't want them to. It doesn't happen very often, but still it does happen. What do I do if I have just done a move and someone says "wait a moment, that's not right"? Do I just say "OK, you caught me. Good job" or is there something else I should do or say?

Every magician gets caught out by spectators eventually. It's simply the nature of the game that magic trick go wrong sometimes. Even tricks that require no skill can fail.

Close up magic is unpredictable

Just like anything that's based on personal interaction, you can't control all the conditions at play. Stage magicians have it easy. They can control how the audience experiences the show. They can set the lighting, sound, angles of view, and the degree interaction allowed. The audience remains more passive, only taking part in the show to a controled degree. Not so for close-up magicians. Close-up magic happens surrounded by the audience, in chaotic situations, and active participation by the audience is almost always present.

Regardless of what magic tricks instructions tell you, people ARE smart and do notice small details. It's true that misdirection and psychology can be used to control them, but it's not guarenteed. Sometimes, people just notice things by chance. Other times, they may not follow your instructions, or get distracted so your misdirection techniques don't work. People may have seen a similar magic trick before, and be less likely to be taken by surprise.

Some people treat the magic they watch as a puzzle to solve. They may jump to a false conclusion about how the magic trick is done. Their solution may be wrong, but it's good enough for them.

If you perform magic for the public on a regular basis, sooner or later you will get caught out.

Slow down the quanity of new magic you are learning. Problems with the performance of the tricks you are currently performing are not solved by adding more tricks to your practice program. Strip your workload to the bare minimum. Your job to make sure you practice, practice, practice and learn all you can and focus on where you are getting caught. Make sure you get EVERY trick in your working set, as perfect as possible, and to a standard where they happen without much effort. This will reduce the amount times your magic tricks go wrong.

Scared about being caught

When beginners first start practicing magic, they often worry about this happening. Just the thought of a magic trick going wrong fills them with dread, and can be enough to prevent them showing anyone their magic. However, the more they perform, the more they realise that a magic trick going wrong, is not the end of the world. It's far worse to have a bored or indifferent audience than it is to have your magic tricks go wrong.

Here's everything you need to do: Laugh it off, and make no big deal about it…

'Yep, you caught me' isn't the end of the world. As long as you make sure you make no big deal about it, and just move on quickly.

'You're sharp! I'll have to up my game with you then… I only show THIS next magic to magicians..'

You stay cool and act as if it doesn't matter. Well, that's what you should appear to do. Secretly, you REMEMBER what happened and think about WHY it happened. When you are not performing, you should start a practice drill to cover that moment, and make sure you work on the material so the same mistake is unlikely to happen again. Over time, you will hardly EVER be caught, but there is always a small chance, so be prepared. Your practice will make you confident that your tricks won't go wrong again.

Having an emergency OUT

Many magicians have a few emergency 'out's they can use if a magic trick goes wrong. It might be an invisible deck, or even just a thumb tip. If a trick goes totally wrong, they just move the moment along and into their emergency out trick. Let's say you had a card picked and 'lost' in the deck. You were about to make it appear on the ceiling. OH NO!! The card really is lost and the trick has failed. It's time for the emergency out:

1) You pull out an invisible deck and place it on the floor, still in it's card box.

2) You then drop/shower all of the original deck of cards over the floored card box.

3) You open the box to show that the card value they picked is the only face up card in the deck…  WOW.

Ok, it's not the trick you were going to show, but it's still a win. As the magician you control what will happen next in the show, so you just steer the original trick into something else.