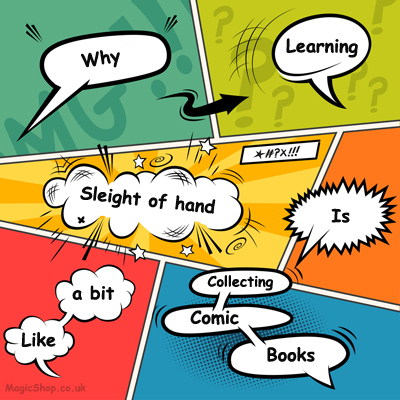 Mark is new to magic and is learning sleight of hand. He is working on controls and sleights rather than tricks and effects..

Mark asks: 'I am new to card magic or any magic for that matter. I have been strictly working on my card handling with barely any work on tricks, just the occasional tricks to show to my kids. I really like working on controls, trying to get the card from middle to top and bottom but am struggling with most of them. What would be your recommendation of a control I should use or practice that is the most practical?'

It's great to hear that you are putting in so much work into your card skills. The results you get are directly proportional to the quality of magic practice you are prepared to do.

Sleight of hand and comic collecting

Did you read comics when you were a kid? I did, in fact, I still read the odd issue of The Walking Dead from time to time. I even collected a few titles when I was back in college. Some of my friends got really into it. They would buy every issue (sometimes two copies) and store them carefully inside a Mayar protective sleeve, with an acid free backing board to keep them in A1 condition. Those comics became 'investments' in their eyes, and they loved every moment of collecting.

There's a little problem with this that used to worry them. The paper in 20th century comics was CHEAP. It contained acid, which over time eats away at the paper. Even though they had done everything they could to keep their 'archive' away from conditions that would damage the paper, it was the ink and paper itself that would slowly fall apart and turn to dust over 20,40,50 years..

Learning sleight of hand as a collection of moves is a bit like comic collecting. When you build an archive of sleights they build up and get mastered over time. But as soon as you stop drilling them, they start to corrode.

Honestly ask yourself: How many of these moves will you remember in 10 years time?

The only techniques you will be able to remember and perform well, will be the ones you constantly perform.

Time destroys muscle memory. Without regular repetition, your controls and moves will degrade until you are disappointed with each one. You need constant performance to keep things fresh and remember all the mechanics.  If you collect moves outside of performance pieces (tricks) to use them, you may end up like the old comic collector that goes up to his attic to find his stacked up boxes of comics are just filled with bags of paper dust.

Sleight of hand and painting

Studying just moves, controls and sleights endlessly is like a painter, spending years learning how to perfectly mix the oil paints to every shade of colour… They end up with a huge palette of paints, but no paintings….

Choose tricks and effects first, then MASTER the controls, moves and sleights you need to perform that effect. Now you have improved your skills with a goal at the end.

Which move should you learn next? Start researching effects that you can build into sets of tricks to form an act. Be REALLY selective. Pick tricks that amaze you, but that will also entertain an audience. They need to be perfect for the type of venue you will perform within, and the type of people that will also be there.

Once you have selected your tricks, start on just one, and work on the controls, moves, and sleight of hand that is required to fully master it. That's what I recommend you work on next.

But that doesn't answer my question!

OK.. lecture over.. If you really want a suggestion of a move or control to work on, you should make sure you master at least one variation of these:

The Over Hand Shuffle Control

A Series of Good False Shuffles and Cuts

The rest; the controls, shifts, placements and changes are just icing on the cake… 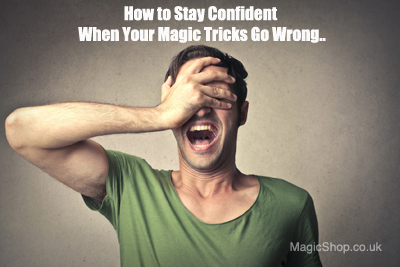 Matt writes: 'What close up magic would you recommend for someone like me? I'm not very confident at performing tricks. The magic tricks go wrong when I try them on my mates.'

Many thanks for getting in touch. This can be a common problem with people starting out in magic. We will of course help but there is so much more to magic than just the tricks involved, true deception and truly fooling someone comes from a great performance. So we will try to help you with all of it!

Firstly, try not try to look at getting lots of new magic. Stop and try to look at why the magic tricks you have tried so far are going wrong. Most problems aren't solved simply by adding more tricks to your workload. Cut right back to a bare minimum of a few tricks to work on. Continuing to pile on new material just avoids having to do the real work of practice. We will of course help out as much as possible but there is only so much we can do, it is your job to make sure you practice, practice, practice and learn all you can and focus on where you think you are going wrong.

You mentioned in your email that you are not very confident when you perform. Confidence can be a big problem because it will negatively impact what you do, causing your mind to go blank leading to hesitation. When you hesitate, you give people moments to look at things they shouldn't be paying attention to. Essentially when you are not confident and nervous you are not presenting magic like it should be and people will catch you out as they are not misdirected or engaged.

Build your confidence as a magician

Here's some advice from Ben Williams on the subject of confidence:

'Lacking confience when you perform magic tricks doesn't mean all is lost. When I first start performing I would shake violently, have heart palpitations, sweaty palms, blank mind, just about everything that you could have as a physical manifestation of fear and nerves. I have personally experienced. Here is a blog post I wrote about overcoming nervousness. It talks about some of the things that really helped me, techniques for breathing, focusing your mind and relaxing.'

Running before you can walk

If you have practiced your magic and know what moves you have to do and are not cheating yourself, the rest is all in your head. Magic tricks go wrong if you are not properly practicing your magic before going out to perform them. Lack of practice will lead to you naturally making mistakes. Make sure you are not cheating yourself and performing things too soon just because you are excited. Also, just because it goes right 5 times in a row in front of a mirror that does not mean it is performance ready. When you perform in front of a group the experience is very different to being in front of a mirror.

This is a weird one. You should try to not care so much. Within your performance try not to give off an intense vibe, try to relax and act like it nothing bothers you. If something goes wrong, it goes wrong, it really isn't the end of the world. If people try to make you feel bad for getting it wrong by laughing or stating how badly it went wrong then shrug it off.

Never get into an argument or try to deny that it went wrong, this will only inflame the situation. Instead you can say something like, 'yep, that wasn't at all like when I learned it at Hogwarts!' This will get  a laugh and diffuse the situation for you. If you can relax then so will your audience, they will stop trying to figure out how it works and begin enjoying it!

With all of this being said, here are some suggestions of great magic to help you ease into it. These are all pretty much self working, so you can concentrate on your performance. Basically I will list a whole load of links for you to help you out Matty!

Pitfalls of Performing to Family and Friends

TRICKS YOU SHOULD LOOK UP

How to Learn Magic Tricks eBook

We hope this helps Matt, please let us know if there is anything else we can do for you. 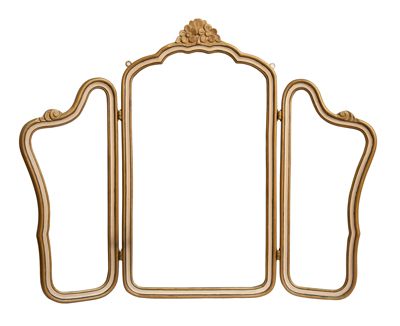 In part 2 of the video mini series on How to Practice magic tricks, Dominic Reyes recorded this short video about some problems to avoid when using a mirror when learning magic tricks:

The most common mistake beginners make when using a practice mirror is to build in 'mirror tells'. Every time a difficult move is repeated, the magician closes his or her eyes for an instant. It's as if they don't want to see themselves mess up the move. Over time this 'blink' becomes ingrained and automatic. To avoid this, it's important to video your performance at regular intervals so you can check that you are not closeing your eyes when you perform a sleight.

How to Practice Magic Tricks Part 1