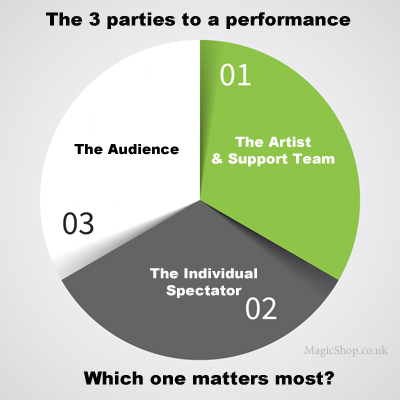 The role of any performer is to ENTERTAIN, nothing else. There are three parties to a performance: the artist (with a support team), the individual spectator and the audience; which party matters most?

The audience – without whom there would be no performance. Yet too many ‘artists’ seem to regard themselves as the most important party. It really does matter a jot how good you are at ____________ (insert your art) if your audience doesn’t feel entertained. Far too many performers regard a performance as an ego trip for them and them alone. It’s called ‘vanity’.

The key to a successful illusion isn't how it looks but the impression it makes AND LEAVES on the minds of the audience. The “Wow!” factor.

Remember, there is no such thing as “magic” or a “trick”, there is ONLY “illusion” and how all those minds perceive and respond to it. Let’s face it, the magical arts are really no more than a subtle form of blatant (but legal, hopefully!) forgery and fraud; please don’t give them a mystique they just don’t have. I’ve seen far too many magicians who are brilliant at the most expert, well-rehearsed, manipulation routine but who have bored me to distraction. There was no “wow”; it was merely a scientific demonstration of a particular skill with no entertainment value. David Copperfield did his famous illusion of vanishing the Statue of Liberty, and yet – conceptually anyway – how it was done is almost embarrassingly simple. What made it a memorable illusion which people talked about for years afterwards was its PRESENTATION. Stephen Frayne succeeds as Dynamo Magician Impossible not just because of the mechanics or visuals of what he does but how, when and where it is PRESENTED, and – ultimately – how it is received.

The elements of preparation

Not only is proper preparation vital for ANY performance but even more vital are the elements of that preparation and the relative importance given to each element. Einstein is credited with saying that scientific inventions were “10% inspiration, 90% perspiration”; I suggest that magic can be looked at similarly – what percentage is skill, what percentage is presentation?

3 magic secrets revealed in the 3 rules of thumb

1) Never look at what YOU are doing. What are your spectators doing?

2) Stuff the magic, think of Einstein!

A note from Dominic Reyes about this blog post

The title of this blog post starts with the keywords 'Magic Secrets Revealed' I personally hate that term, as it seems to exist simply to attract visitors that are searching for magic secrets and methods to the tricks they have seen on TV. As you know from reading this blog, that's not what you will find here. However, I picked it for a specific reason. Stephen posted the content of this post as a reply to a post about visual magic by Ben Williams, and I really liked the message he was making. I wanted to turn it into a full post, rather than have it buried in the comments section of another post. I also think the message is very important to exactly the people that would be searching online for the term MAGIC SECRETS REVEALED. Hopefully a few of them will take the time to read this short post and pick up a TRUE magic secret they might actually get some use from.

Good luck with your magic