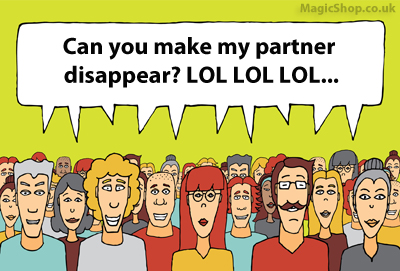 Richard writes: 'I've been practicing magic for a few years, but only performing to my family. How do I find an audience for my magic tricks?'

Nice work Richard! You've been practicing your magic  over the long term, and that shows a real commitment to develop as a magician. Like many people, you have reached the point where you have  run out of new people to see your tricks. After all, magic needs fresh eyes because a magic trick is never as strong when it's repeated to the  same person. Lets look at some ways you can start performing to a wider  audience.

Dominic Reyes recorded a short video in which he talks about finding an audience for your magic tricks:

In a nutshell, it's all about reaching out to the community. You already have an audience that would love to see your magic. It doesn't have to be a commercial transaction as the real value for you initially is  experience. Start looking for an audience for your magic tricks amongst  the charity and support sector. Study the 'what's on' guide to look for events that might like to 'bolt on' some close up magic. Advertised  events may be at a stage where they have already arranged the entertainment, but that should not stop you. The goal is to make contact with the organisers and introduce yourself. When the best season of  events start to be planned, you can recontact and be at the front of their minds, when they are doing serious planning.

The secret is to MAKE CONTACT. The world will not come to you, all by itself.

Introduce yourself and become known in those circles. If you make an effort to put yourself out there as a possible entertainment choice, you will land some gigs sooner or later.

Remember to be active in the magic community. Join a local magic club and be INVOLVED. You will have fun, learn, and develop an understanding of your local areas market for magicians.