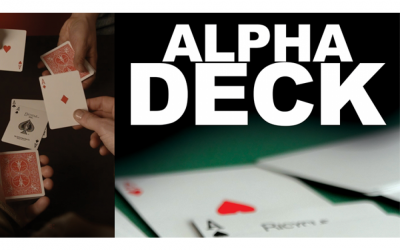 I ordered the Richard Sanders Alpha Deck as a pre-release as it looks interesting as a new effect. I was specifically interested in it as a new, pre-release item.

I have now found today that it seems to be the same trick from 2005 could you confirm whether this is a new trick/release as suggested in the email, or is the same trick that has apparently been available for more than a decade?

Hi, Richard Sanders Alpha Deck was indeed first released a long time ago, but it has been discontinued for many years. This is his new release featuring that effect together with excellent video tuition and  7 more effects with the blank deck included.

Great feedback that Richard has not marketed this as a re-release. It’s not a MoM product, so we don’t have much control over the way the item is released or marketed, but having said that..  I don’t see how that would have been of value to include in adverts for the effect, because if a magician already owned the old version, he or she would already know that..  If the magician doesn’t already own the effect, it doesn’t matter when or if it was released in the past..

The only value in knowing this, would be if something being a ‘new release’ was a good justification for purchasing it. It raises a warning about the ‘tyranny of the new’. The danger of choosing what’s ‘new and hot’ rather than what’s the most helpful to our own personal journey in magic.

The worst reason to choose any magic trick is just because it is a new pre-order release.

Items are always being released and modernized in magic. It’s usually only worth mentioning that if there is a reason why people that already own it should order another. I don’t think they do need to do that in this case.

It’s the same in publishing.. I brought a copy of the book 1984 a few months back for my son.  There are many, many different released of this over the years and they don’t refer back to each other. It’s rereleased ‘new’ for each generation…

Everything is new to the beginner

In magic, the drop off rate for magicians is very high as people discover the art, begin to learn and then wander over to the next interest or hobby once the shine of ‘new’ fades.  Luckily, those people are replaced continuously by new magicians discovering the wonders of learning magic..  I think it’s a great thing when creators refresh and re-release great magic that otherwise would just fall into the shadows. The goal here is to teach magicians.. The ‘latest and greatest’ trend works against that..

I think you are going to love Richard Sanders Alpha Deck and I wouldn’t get bogged down with worry over its history.. 🙂

Find out more about Sublime Self Working Card Tricks here

Yes, You CAAN – a brilliant self-working ‘Card At Any Number’ routine that requires NO DECK! Everything you need will slip into your wallet, and you’ll be prepped for a total mindblower anytime/anywhere!

Sync – a thought of card routine that seems utterly impossible – a card ‘constructed’ by your audience is divined with almost zero procedure. Super clean. Super awesome!

One Hand & One Card – a card is selected, disappears from the deck and then appears in your pocket. ALL WHILE YOU HAVE ONE HAND STUFFED IN YOUR POCKET! Super clean. Ridiculously easy.

Plus seven more stunning examples stuffed with cheeky ruse’s and deceptive routining in place of difficult sleights to make you look like a mega-skilled card shark.

You will receive a custom gimmick printed by United States Playing Card Company, ready to use immediately.

Find out more about Sherlokoin here

Watch More Behind The Curtain Reviews