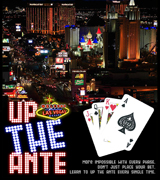 We received this great feedback from a happy customer about how he used Up The Ante to Raise a LOAD of money for charity. Good Work Brett!

‘I just arrived home a few days ago from a charity event where I used Martyn Smith’s “Up the Ante” as a method of raising money for a very worthy cause.

For those not yet familiar with “Up The Ante” – this trick is just a knockout!!!

The charity is called “Lose The Training Wheels” and is an organization that helps kids with Downs Syndrome and similar disabilities to learn how to ride a bike. There were the typical silent auctions, but the absolute highlight of the night for me was “Up The Ante.”

Let me suggest that any Magician intending to work a benefit like this can really make some big $$$ for a charity by using this gem!

In addition, Magician’s seeking a gig for a charity could sell themselves based on the extra $$$ that “Up The Ante” could bring in, not to mention the fun and fantastic entertainment value.

Tonight we raised over $850 for this charity during the band’s intermission – this amount directly attributable to “Up The Ante.”

Here is the scenario: I brought along about $1000 in play money which were split up and handed to 4 hand chosen spectators who were told in advance that this would be a trick and that of any monies wagered – 100% would be donated to the charity. The group would have to work together to decide how much to bet on each round. Just to make things interesting, I also told the audience that if for some reason ANY of my card predictions were to be wrong, then I would donate my entire fee for the gig to the charity.

I told the audience that just as in a gambling casino, I would be the “House” and the 4 spectators would be the gamblers.

Without going into all the details of the numerous betting rounds, suffice it to say that the audience started to really get whooped up as I got to the two sets of 13 cards. Some audience members even threw some real $100 bills on top of the play money because they were having so much fun!

I would encourage ANYONE out there to try “Up The Ante” for a charity or fundraiser. I received compliments all night long from the hosts and guests who were blown away by this “packs small – plays big” effect that is so much more than just a simple card trick. – BRETT’

Up The Ante is available HERE